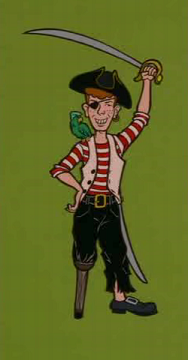 Upchuck needs to watch where he's swinging that cutlass on International Talk Like A Pirate Day. Even his parrot is giving him a dubious look. Everyone brush off their "Arrrr"s and "Ahoy there"s for a fun holiday!

If that's not enough excitement, you could also celebrate National Dance Day, but I think Upchuck should put down any sharp objects before trying to join in. Jane will spend today thinking back fondly on her tribute to Jackson Pollack and the week she forgot to sleep.