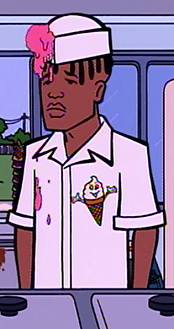 Mack is clearly in no mood to celebrate National Chocolate Ice Cream Day, and it's no wonder: that's clearly a scoop of strawberry ice cream on his head. Better luck next time, Mack!

Today is also VCR Day, so maybe Jake could pull out those home movies again! On second thought, maybe that's not such a great idea. Jake, just have some chocolate ice cream and try not to think about your childhood, okay?