Anyone Want Some Firstdown Fudge? 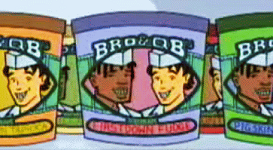 Today is Creative Ice Cream Flavors Day, a day that seems made specifically for Bro & QB. Anyone else kind of want to see the backstory for that partnership? I feel like alcohol must have been involved somehow. I demand that someone write a fanfic about it, and the ice cream puns had better be glorious.

This is also International Joke Day, so let's spend some time today trying to figure out exactly why the chicken crossed that road.