Someone Pick Upchuck's Jaw Off the Floor, Please 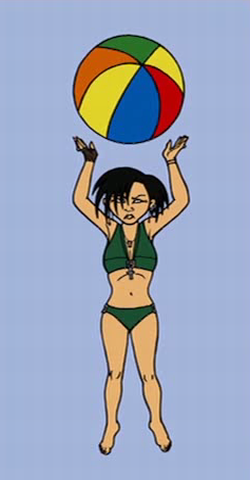 Andrea, unlikely as it is, seems to be celebrating National Bikini Day. Even stranger, Andrea was also featured in a bikini in the end credits of Is It College Yet? Someone working on the show must have had a bit of a crush on everyone's favorite goth chick.

Today is also Work-a-holics Day, and I really hope that Helen plans to celebrate only one or the other. I have to assume bikinis are not part of the law firm's dress code.

Finally, today is the anniversary of the episode "Mart of Darkness," which aired on this day in 2000. In it, we found out that Andrea worked at Payday, although probably not very hard. And not in a bikini, either.