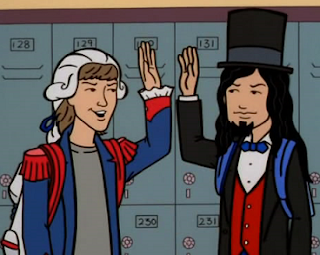 Looks like George Washington is giving Abraham Lincoln a high five to celebrate the anniversary of Lincoln's election to the presidency on this day in 1860. Of course, since the two are actually personifications of a single holiday, perhaps I should say that President's Day is giving itself a high five? Man, holidays are confusing.