Insert Your Own Snake/Lawyer Joke Here 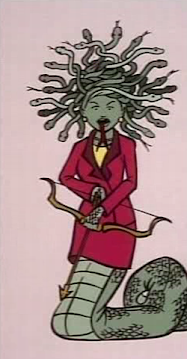 I think Helen is overachieving for World Snake Day, but I guess we shouldn't have expected anything less. Maybe she could put the bow and arrow down, though.

Today is also the anniversary of the Apollo 11 spaceflight, so all you space nerds in fandom should party hard.