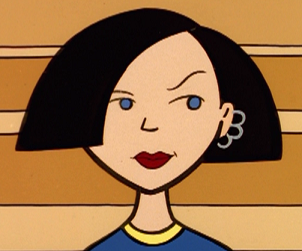 Jane's happy to observe Male Watcher's Day, and from her expression she likes what she sees. Just be careful, Jane--you don't have the best track record when it comes to choosing guys.

Today is also Typing Day, which Daria is more likely to celebrate. It seems to be her medium of choice for writing, unless she's got a cool video game in progress.