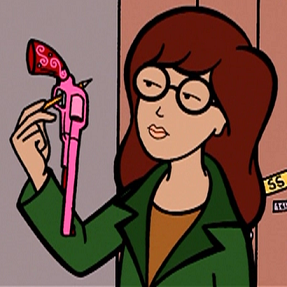 Something tells me Daria's not really that into Pistol Patent Day, but that may just be because the specific pistol is pink. I wouldn't want to touch that with my bare hands, either.

Today is also the anniversary of the episode "Partner's Complaint," which aired on this day in 2000. No pistols were involved, and considering how many people lost their tempers it's probably a good thing.