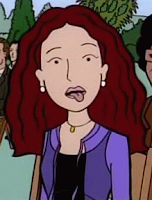 Amy's got the right idea for Stick Out Your Tongue Day, but I don't think your niece's wedding is the most appropriate place to celebrate. Then again, any wedding should have at least a little bit of silliness thrown in!

Today is also the anniversary of the episode "Groped by an Angel," which aired on this day in 2000. I have no way to verify this, but I'm almost certain Quinn's guardian angel stuck its tongue out at her at least a few times.

Labels: anniversary, groped by an angel, holiday, lots of new and continued fanfiction