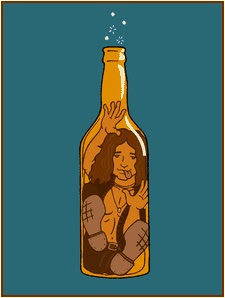 I think Jesse has taken National Beer Day much too far, but I guess he doesn't seem upset about it. I suspect Kevin's going to be celebrating this one, either by smashing cans on his head or singing all the way down from ninety-nine. Anyone else doubtful that he can count to ninety-nine at all, let alone backwards?

Today is also the anniversary for the episodes "This Year's Model" in 1997 and "I Loathe a Parade" in 2000. The Fashion Club got plenty of chances to pose in both, and Daria managed to torpedo their efforts both times. Everyone got to use their strengths!