I Have to Pee WHERE?! 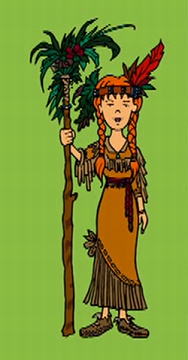 Quinn's ready to set off as Sacagawea with Lewis and Clark on their expedition, which began on this day in 1804. Of course, she'll need Lewis and Clark to carry her fifteen suitcases because she can not leave anything behind. You wouldn't want her to go without her cran-raspberry lip gloss, would you?