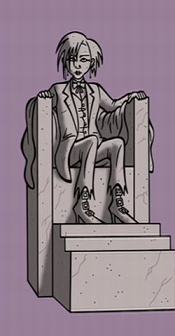 Andrea may have a stony expression on her face right now, but only because she's made of actual stone in honor of the anniversary of the Lincoln Memorial, which was dedicated on this day in 1922. While the memorial is pretty impressive, the personification of Lincoln's birthday is not. I mean, what could the guy possibly have against sandals?

Today is also the anniversary of the day that Joan of Arc was burned at the stake in 1431. Interestingly, she was executed not for heresy or for helping Jane with an art project, but for dressing in men's clothing. I feel like the Fashion Club would have been okay with the verdict.