My Night at Daria's was Too Cute! 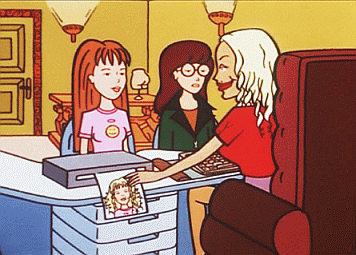 Disco316 has provided us with a DariaWiki page on Dariarotica. About time! Just be careful what gets added to it.

More in a few minutes. Just got out of the hospital (long story, doesn't involve a penguin, forget it), need to catch up on stuff. brb!

BACK: More discussion of a possible Midwest Dariacon 2009 around Labor Day is being held on PPMB. Interested? Post about it!

And now for the fun stuff.

Labels: dariacons, dr. shar, lots of new and continued fanfiction, my night at daria's, too cute

Just got out of the hospital (long story, doesn't involve a penguin, forget it),

Well, whatever it involved, I hope you're okay now!

I apparently will be by Monday. In theory.

I liked "Too Cute" better. Much funnier, excellent one-shot lines.

I admit it, I like season 5 best of all the seasons, and "My Night at Daria's" is my second favorite episode. ("Boxing Daria being #1)

The only thing I didn't like about those two eps is that all the reasons for the eventual Tom/Daria breakup as shown in IICY are there yet neither Tom or Daria seem to realize it.

As a bonus it has the exchange that most heartens Daria/Jane 'shippers everywhere:

"Daria: Tom and I didn't have sex, and we're not going to any time soon. Unless, of course, a bomb goes off and, as Earth's last two survivors, we must replenish the human race. Although, frankly, that's not motivation enough for me."

Helen - Well, I can't say I'm not somewhat relieved. I just want you to know that whatever decisions you make in life, I'm on your side and...

Tons of great lines in it too, plus the angst (subtle psychological stuff, fear, insecurity, value system questions, the stuff that makes my heart warm!)

Just noticed the hospital bit... Hope all is well or will be soon

Deeply dislike "Too Cute." Seems like a lazy caricature of an important issue.

It does have some nice Daria/Quinn moments though, and probably Andrea's best line: "Aren't you even a little worried that there might be a Hell?"

Doesn't compete with "Sushi sucks! Sake rocks!" from MNaD, though. And MNaD does a better job of dealing with a sensitive issue, even if the ending seems like a bit of a cop out.