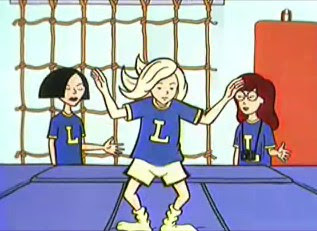 Yes, true, she's called Jennifer on Mr. O'Neill's seating chart in that first-season episode we all remember but whose name I have forgotten in one of my senior moments. She's also called Burnout Chick and a bunch of other stuff, too. However, the MTV staff just called her Burnout Girl.

The following is from the missing flipbook "Oh, the Obscurity!" (It was supposed to go here.) Some of these characters were detailed on a webpage in Sick, Sad World (the website), which Wraith lovingly saved for us all. The images he used are probably the ones used in the missing flipbook. (See here and here.)

I did minor editing on the text, which misspells "shoulder" and does a few other irksome things.
Now, this is interesting. We get the dope on Shaggy, Burnout Girl, Dawn, Girl Teen 35, and Adult Male 48, who I've never heard of before. But I still think that the blind guy from "Esteemsters" is not the same person as was later shown in "I Don't" and wandering the store aisles in "Mart of Darkness." Click on "blind man" in the Labels section below for more.