We Are Experiencing Technical Difficulties. Please Stand By. 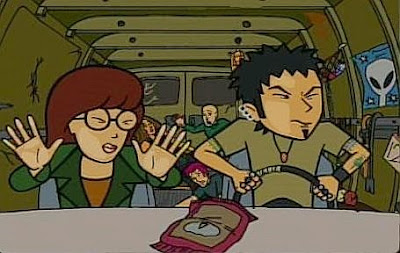 The very first Indianapolis 500 was held on this day a mere 98 years ago. Cool as it was, it was not cooler than the Kentucky Derby, however. (Sorry, little bit of local-city rivalry creeping in there.) At right we see Trent's unsuccessful attempt to duplicate that historic event.

Labels: indy 500, is it fall yet?, lots of new and continued fanfiction

Oh my god will Brandon be happy...

And Then Daria And Jane Kissed » by Smileyfax

A series of one-shots depicting Daria and Jane pairing up during each aired episode of Daria.


And the first one up is very good. Yo Smiley, if you are reading this, we NEED you at the PPMB!!!

I'd like to post there, but I'm just really quite shy! (Though I suspect crossposting my fics there might get me more input than the 1-2 reviews I get per chapter on FF.Net).

Nixon spoke with me from Saturn last night to tell you to join us at PPMB. You will be assimmimi... assimmiill... just show up, okay?

Oh yeah it would get you lots more comments and feedback Smiley, besides you already have a cult following, so no need to be shy!

I love the fact that you are doing almost the direct opposite of what I am doing. You get Daria and Jane to kiss every few hundred words while in my story if they do end up kissing it will probably take until somewhere around 80k words the rate I am going heheh.