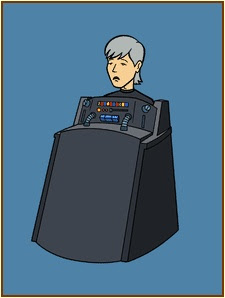 Today is the anniversary of the birthdays of Gene Roddenberry (who created Star Trek) and former President Bill Clinton. Just thought you should know. Tom (left) is disguised as Captain Christopher Pike (right), after his near-fatal banana-peel injury. Tom's life-support model is spiffier than the original one, as you can see. That's because Tom has more money. ("This oxygenation dial goes all the way up to eleven!")

Looking for Daria-themed wallpaper for your computer? See this PPMB thread for ideas. I will list more when I get time. I've found a bunch on old MTV Daria sites.

Going back to a topic mentioned earlier, I would rather not link directly to NC-17 rated fanfiction here, but a blog on adult Daria material probably isn't warranted. SFMB can handle the whole issue quite well in its message board. 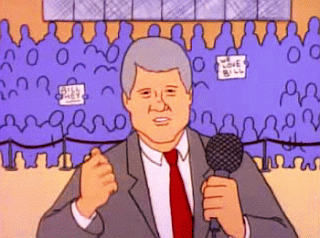 Bill Clinton, by the way, is shown in the act of answering Daria Morgendorffer's question about funding for education at Highland High School (Beavis and Butt-head episode "Citizen Butt-head"). Very few fanfics even mention this event in her life. Strange.

Why is Daria so disliked? Perhaps her hatred of lying, liars, duplicity, and so forth is the reason. Interesting article.