There's Got to Be a Morning After... 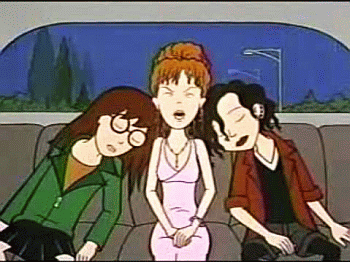 I still don't know why they didn't play the theme song from The Poseidon Adventure when the Princess Fairy sank. Someone should rewrite "Just Add Water" (which premiered 10 years ago today) so it capsized from a rogue wave and everyone tries to escape the floating hull before it sinks.... BUT NO ONE DOES, HA HA HA HA HA!!!

Anyway, that episode borrowed a lot from the movie Titanic and the Exxon Valdez disaster. Some people think it borrowed more than that. The DariaWiki page needs some work, if anyone could help out with that.

Today is also the 14th anniversary of the completion of the Daria pilot, "Sealed with a Kick," and fanfic character Michael Fulton (of the Falling into College series) is 28 years old today.

How do you think "Just Add Water" could have been improved, or at least made more interesting? Using the Comments section, write down your suggestions for plot changes that would have helped. A giant squid might have helped.

Certainly, a giant squid would have added some a humorous factor, and I certainly agree about the need or poseidon music somewhere in there.

I think, perhaps the Princess Fairy should have hit an iceburg, that just popped up out of nowhere. After all, it's a cartoon, there's an allowance for plotholes (or is it potholes?).