The Lady and the Tiger 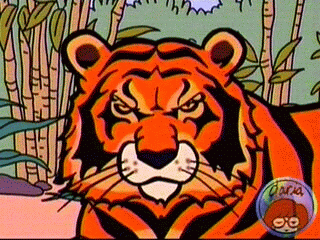 "Dye! Dye! My Darling" aired for the first time on MTV a mere nine years ago. Jane has this weird idea to dye her hair and be both a lady and a tiger, presumably to put more spice into her relationship with Tom, but whoa, do things ever get off course from there. A lot of AUs use this episode as their jump-off point. None of them use the tiger, though. Why? What if the tiger had jumped out of its cage and... no, we've abused Tom enough.

The tiger aside, is there anything new that can be said about DDMD, other than this? You tell me.