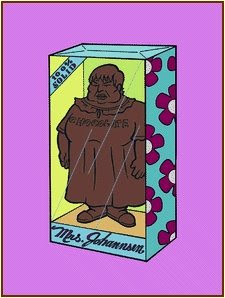 Yes, today is a big day in Chocolate History, as we are reminded by Mrs. Johanssen (this is the correct spelling of her name, by the way). Today is the 195th anniversary of the birth of Henri Nestlé, one of the co-inventors of milk chocolate and the first head of the company that makes so much chocolate. You know what to do to celebrate: eat 195 chocolate anythings. Get going.

Once you are done with that, it is also National S'mores Day. Celebration is mandatory. Do it to it.

How come we haven't seen any fics about Mrs. Johanssen's niece Scarlet?

You know what to do to celebrate: eat 195 chocolate anythings.

That's not fair. Why do I have to cut down in order to celebrate? (pouts)

I've started a Daria fanfic, unnamed at the moment (I name them when I'm done), and I was curious where I should post it besides my LJ and my fanfic.net page. The only other Daria site I've run across is Martin Pollard's Outpost Daria. Any suggestions? Feel free to e-mail me at coonassblondie@yahoo.com