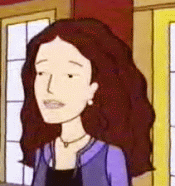 Today is the 96th anniversary of the birth of Walt Kelly, the creator of Pogo, which was one of my favorite comics when I was very small. I trust anyone who remembers this philosophical comic strip will share fond thoughts about it with me. It is possible that Daria, knowingly or not, can quote some of Pogo's most famous sayings, many of which have worked their way into our culture. (Amy Barksdale, at right, is far more likely to have been an appreciative Pogo fan.) I know that at least one Daria fanfic writer is very aware of Pogo.

This is also the 174th anniversary of the infamous Moon Hoax, perpetrated by the New York Sun. Daria would certain find that story highly amusing. Curious that today some people think that landing on the Moon was a hoax. You can't please everyone, can you?

Was there a character on Pogo named Skeezicks? I ask because my grandfather nicknamed me after a character from a comic strip from that era, but I never could figure out which one.

Not from Pogo, but from Gasoline Alley.