Jodie and Mack are leaping in honor of Leap Day, and you can tell someone to go take a flying leap too, if you want! Or just enjoy the random extra day tacked onto this year's calendar. I just want to know one thing, though. If we were going to get an extra day, why did it have to be a Monday?

No, Really: Who's Buried in Grant's Tomb? 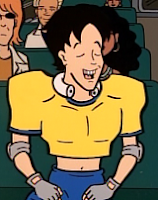 This holiday, No Brainer Day, was made just for Kevin! If anything, he might even be overqualified. Today's the day to ask easy questions and/or give stupid answers, depending on your preference. Or just do no thinking at all. Pretend you're in Mr. DeMartino's class. 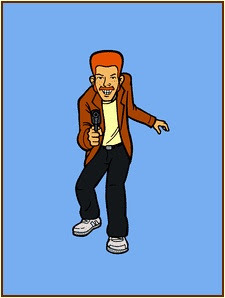 It's Pistol Patent Day, the anniversary of the day Samuel Colt patented his revolver in 1836. I'm not sure if Upchuck with a gun is scarier than Upchuck without one, but I'd feel better if he wiped that cheesy grin off his face.

Today is also the anniversary of the episode "Partner's Complaint," which first aired on this day in 2000. I think Jane should be glad Daria wasn't carrying a pistol when she kept going on about Tom, although they did work things out in the end. Without pistols, I mean--although that could be a fun AU fic.

Daria's surprisingly willing to join an extracurricular activity for Play Tennis Day, but maybe Jodie finally wore her down. Or if Jodie couldn't talk Daria into joining her on the tennis team, maybe Jake did. Apparently he wanted to go to tennis camp instead of military school, so this could be his chance to live vicariously through his daughter.

Speaking of unwanted physical exertion, today is also the anniversary of the episode "The Daria Hunter," which aired on this day in 1998. Jane revealed her love of Great White Sharks while Quinn and Sandi's rivalry reached new heights. 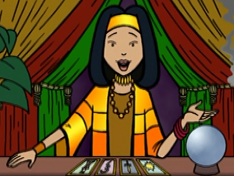 Tiffany's ready to tell your fortune on this fine Card Reading Day, but I wouldn't take her up on it unless you've got a few hours to spare. By the time she finishes predicting your future, the future will be here. 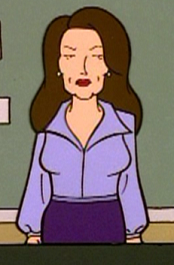 Barch is, in her own way, observing the anniversary of The Feminine Mystique, which was first published on this day in 1963. I don't think her particular viewpoint was what author Betty Friedan had in mind when she wrote it, but I have little doubt that the book sits prominently on Barch's bookshelf.

Today we also observe the anniversary of the episode "Fizz Ed," which aired on this day in 2001. I suppose we'll never know if Kevin really decided to name his firstborn Ultra Cola Thompson, but I'd like to think he did.

So She Really Did Make a Dainty Garland for Her Head and Sing! 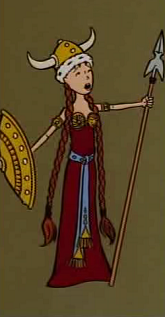 Be sure you don't miss Quinn performing "Madama Butterfly," which premiered on this day in 1904. She'll be singing in the automotive department at Payday, and while you're there could you pick up some bootlaces and barbecue sauce?

Speaking of singing, today is also the anniversary of the musical episode "Daria!," which aired on this day in 1999. There weren't any people dressed as Vikings, but I'm pretty sure there weren't any in "Madama Butterfly" either.

Please Do Not Wear Sandals Today...Trust Me On This

The Holiday Island High School presidents are celebrating President's Day, and I can only assume they have to share because they are really just that unpopular on Holiday Island. Or maybe it's budget cuts.

This is also Singles Awareness Day, so to all you single people out there...hi! We're aware of you!

A Holiday For All of the DJs Out There, Lame or Otherwise!

Bing--or is it Spatula Man?--is inviting everyone to celebrate World Radio Day today on Zeeeeeeeee 93! If you call in right now, you could win a free T-shirt! Or you could just save your sanity and change the station.

For all of you fans of non-annoying radio out there, here's Free Radio Lawndale by Ken Tremberth and Erin Mills. Enjoy!

Try Not to Spill Milk on Your Friends, Either

Jake clearly gets the point of Don't Cry over Spilled Milk Day, as he doesn't seem about to spill any of the stuff at all this time. I do hope that he also remembers that one shouldn't clean up spilled milk with paper towels near open flames, either.

Today is also Make a Friend Day, so if you get stuck in any self-esteem classes then be sure to take note of any snarky artists in the room. You never know what might happen. 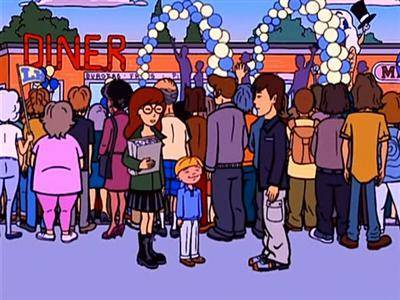 Daria and Tom aren't into the Mardi Gras spirit, but then again who can blame them? Their last parade experience didn't go so well, after all. I also doubt that Lawndale's Mardi Gras parade is anything close to as exciting as the ones in New Orleans, either.

That Greeting Card Industry Isn't Going to Support Itself!

Quinn's clearly enjoying Send a Card to a Friend Day, although I'm willing to bet she didn't bother to send any cards of her own out. Such a shame, specially since she once had such a promising career ahead of her as a greeting card poem writer.

Today is also Superbowl Sunday, so be on the lookout for any school review meetings Ms. Li might be trying to sneak past you. Also, beware of dip--short for dipsaster!

Don't touch that dial! It's National Weatherperson's Day, and you might want to stay tuned in case there's a hurricane on the way. You wouldn't want to get trapped in a shed with Kevin and Brittany, would you? Especially once they start singing.

Daria's in one of her more disturbing alter egos in honor of Sesame Street character Elmo's birthday. Love him or hate him (and I think more people lean toward the latter), the little red muppet has had a big impact on children.

Helen and Jake are all set for National Bird-Feeding Month, and you can join in, too! Although I think it might be simpler if you just set up a bird feeder in your yard. I'd love to see Jake's reaction to the squirrels that try to steal from our bird feeder. The battle would be epic.