They Really Are Eating Unauthorized Chocolate!

Tom and Daria are completely on board with National Chocolates Day, especially because Quinn's going to be pissed when she finds out. If you'll excuse me, I have some celebrating of my own to do. See you when the sugar coma wears off!

I see Jodie has added "Jimi Hendrix impersonator" to her already-substantial list of extracurricular activities, at least for today because it's the anniversary of the late musician's birth in 1942. For any further historical details about Hendrix, we should ask Stan from "Speedtrapped." Unless you value accuracy, in which case you should ask literally anyone else.

Apparently There IS Crying in Baseball

Mr. O'Neill would wish the late baseball player Joe DiMaggio a happy birthday, except that right now he's an inanimate object and therefore unable to speak. Let's enjoy it while it lasts, shall we? Especially because the real Mr. O'Neill is probably even less intelligent than the bobble-head version.

I Hope Helen's Credit Card Can Handle the Strain 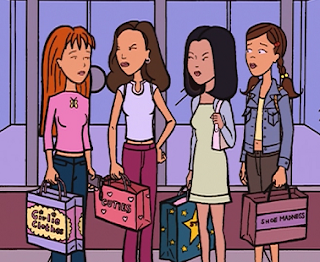 The Fashion Club is ready to go for Black Friday, and I pity the crowds that get in their way today. Just beware of shopper's cramp, girls!

Meanwhile, I'll be joining Daria and Jane for Buy Nothing Day, but that's less of a protest against consumerism than it is pure laziness on my part.

Finally, today marks the eleventh anniversary of this very blog, begun on this day in 2007 by awesome writer/fan/blogger/human being The Angst Guy. Happy birthday, you wonderful old fandom blog! 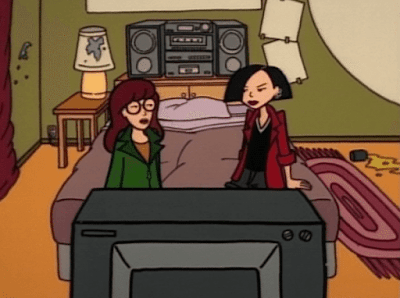 Daria and Jane are celebrating World Television Day and--oh, wait. This is what they do every day, so never mind. I guess I don't need to tell anyone how to observe this holiday!

Today is also False Confession Day, so feel free to pretend you committed a crime, I guess? I have no idea what the point of this one is, but it could be a good opportunity to claim you murdered Kevin. Everyone else did, after all.

What a Potty Mouth! 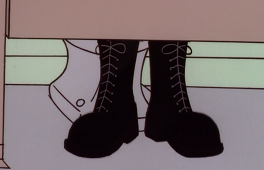 Daria's getting up close and personal with her friend Talking Toilet for World Toilet Day. I'm not sure it'll be much of a conversation, though. Daria's not much of a talker and I suspect I wouldn't like to hear the things a toilet has to say.

Helen's hoping that Homemade Bread Day will be over soon, because she just can't take kneading any more bread. Someone should tell her that bread machine bread still technically counts as homemade, but maybe she just really wants that soul-flavored bread.

Once she's done with the breadmaking, she should take some time to get outdoors for Take A Hike Day. Mr. DeMartino is way ahead of her, and frankly I'm worried he might not come back. With Kevin as a student, I'm not sure I could blame him.

Things Went Downhill After the Fashion Club Broke Up

Either Sandi is getting surprisingly into America Recycles Day or she's just lost her damn mind entirely. Then again, I suppose there's no reason it can't be both. I'm sure Quinn will be happy to see that she's not the only one who's been caught wearing--or wielding--a Hefty bag!

If you really get the urge to do some cleaning up today, try going through the fridge for Clean Your Refrigerator Day. Look out for that red stuff, though. I have serious doubts that it's cranberry juice. Don't disturb Daria right now, because she's observing Young Readers Day. That's some serious dedication to a holiday, considering she had to go back in time to do it! I'd ask her what the secret of time travel is except she just got to a good part and I can't bear to interrupt her reading. Young, old, or in between, please enjoy a good book today!

A Salute to Those Who Served

Today we salute not only George Patton on the anniverary of his birth in 1885, but also all veterans because today is Veteran's Day. I'm not sure if there are any military veterans in Daria, because aside from military school references no character is explicitly stated to have served in combat. Even Mad Dog has no specific mention of being a veteran to my knowledge, although it seems likely and fanon agrees. Mr. DeMartino is a likely candidate, too, and I suppose Buck Conroy might count if you include mercenaries. Anyone I'm missing? Let me know in the comments.

"Mad Mack" Is More Than Just a Nickname!

Mack's concocting something extra special for Inventor's Day, but he's got a long way to go if he wants to beat Andrew Landon's folding coffee cup. Judging by how much of that glowing green stuff he's spilling, I'm not sure he's going to accomplish much of anything useful aside from maybe disfiguring himself horribly.

That might work, too, though, because today is also Chaos Never Dies Day. That holiday seems like it be more well-suited to Kevin, but I'm not going to argue with that face.

I Isolate Radioactive Isotopes, Therefore I Am

Quinn's doing her best Marie Curie impression for the anniversary of the physicist's birth on this day in 1867. At least she will until the Fashion Club catches her acting like a brain. I mean, it's not like she has to make that much effort in Ms. Barch's class to get a good science grade. She's got two X chromosomes, so she's good for at least a B no matter what she does.

If she decides to keep a lower profile, she can switch to her "existential" turtleneck outfit in honor of philosopher Albert Camus's birth on this day in 1913. I'm not sure exactly how Camus felt about accessories from the street fair, though. 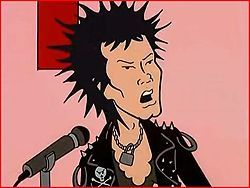 Guy Fawkes Day doesn't seem very happy that today's his day, but I suppose if you represented a holiday based on something that didn't happen then I suppose you'd be less than enthusiastic as well. Celebrate with some overused English stereotypes. Pip-pip and cheeri-o!

A Book and a Sandwich...What Could Be Better? 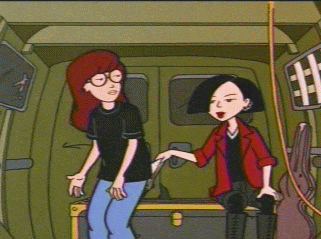 Let's not get desperate here. It might be National Sandwich Day, but I'd like to think we can come up with a better option than "antique sandwich Jane just peeled off of Daria's butt." For example, Earl and Barbara just cooked up a new batch of grilled cheese that they'd be happy to--on second thought, let me have another look at that PBJ Jane found.

If, like me, you're having doubts about the whole sandwich thing, then let me invite you to celebrate Book Lovers Day instead. It's well-suited to Daria fans and less likely to give you indigestion.

I Hope They Stocked Up on Antacids! 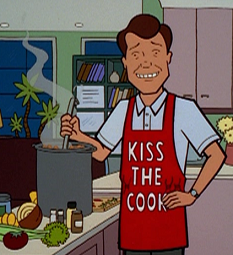 I think Jake's the only one in the Morgendorffer house that's feeling enthusiastic about Men Make Dinner Day. Everyone else is making sure they still have Pizza King on speed dial.

Personally, they should try being a little braver. After all, today is also the anniversary of the 1871 birth of Stephen Crane, author of The Red Badge of Courage. I don't think Crane would agree with Mr. O'Neill's comparison of the book to the Cowardly Lion, but considering Crane died shortly after The Wizard of Oz was published I suppose he had more important things to worry about.