Kevin Must've Pissed Everyone Off Again

Daria's off to solve another mystery as the protagonist of Murder, She Wrote, which first aired on this day in 1984. Whether the case involves a skydiver falling on a cow or a mysterious goalpost collision remains to be seen, but I'm sure our plucky little detective is up to the challenge. Unless there's something good on TV. 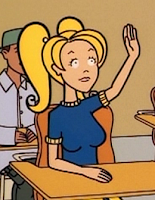 Today is Ask a Stupid Question Day, and I'm sure Brittany has cooked up a good one. Or a bad one, depending on your perspective.

I don't even want to know what Kevin's contribution is going to be, but I'm sure Mr. DeMartino will hate it. Especially if Kevin has also been celebrating Drink Beer Day, which wouldn't surprise me.

Ring a Bell and Kevin Will Plant an Apple Seed! 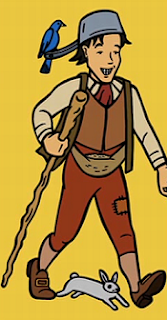 Kevin's hard at work for Johnny Appleseed Day, but someone should probably check his bag. For all we know, the genius is planting jelly beans.

Today we also celebrate the anniversary of the birth of Ivan Pavlov, the janitor physiologist who is best known for his work with classical conditioning.

This Blog Post Was Brought to You By the Letter "D"!

Daria's wishing an enthusiastic happy birthday to the late Jim Henson, who was born on this day in 1936. I'm not sure which is creepier: the fact that Daria is morphing into a muppet or the smile on her face.

This is also the anniversary of the Nirvana album Nevermind, which was released on this day in 1991. Trent is probably interested in this one, although Quinn is cringing as we speak over "that...that...grunge."

What About Those Hobbit Business Women? 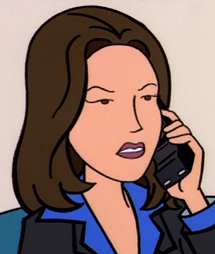 Linda's pissed because she just found out that Helen got voted onto the board of the Lawndale Business Woman's Alliance. That's only fitting on Business Women's Day, though. And anything that annoys Linda Griffin is probably a good thing no matter what it is.

This is also Hobbit Day, so today would be a good day to get that special someone a candle that's vaguely shaped like a hobbit. Or, you know, not.

Daria's got her game face on because today's the anniversary of the famous "Battle of the Sexes" tennis match between Billie Jean King and Bobby Riggs in 1973. I'm sure it was one of Ms. Barch's favorite moments in history.

Daria Can Has Cheezburger

Daria's set for National Cheeseburger Day, but she hasn't decided yet if she'll eat the burger or stick it in her boots for that squishy feeling around her toes. Jane, on the other hand, is probably going to eat at least two jumbo burgers without feeling a thing.

"Mom's going to miss the guacamole!" 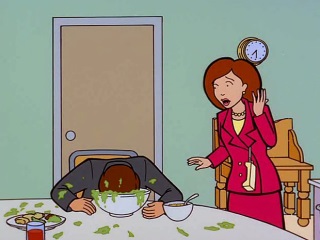 Jake's getting a little too into National Guacamole Day, and Helen's so concerned about it that she actually let go of her cell phone. It really must be serious.

Daria's just checking out "People Weekly," in which she appeared on this day in 1998. She was a judge for best and worst dressed, which really seems like more of a Fashion Club thing. Still, it seems like she had fun. Or whatever passes for fun with Daria.

Daria's already celebrating National Video Games Day, although it's possible she's just putting off her latest writing project. I won't judge; I know the feeling all too well.

Still, this is also National Day of Encouragement, so how about this: You can do it, Daria! Write that story! Bust through that plot hole! Conquer that writer's block! And if that doesn't work, then nail that head shot! 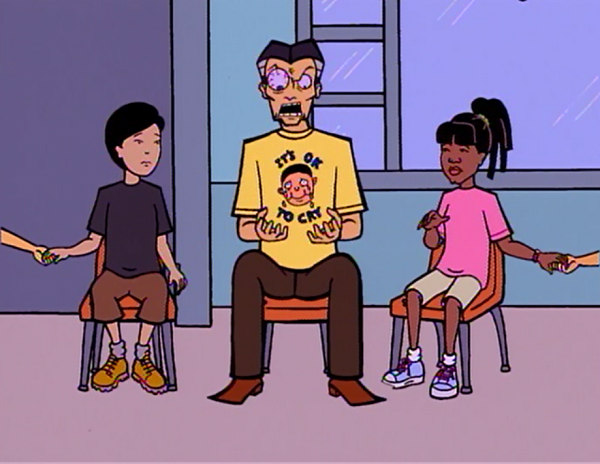 Helen's busy kneading away for National Date Nut Bread Day, although if she wanted to get out the bread machine I promise I won't tell Willow. Then again, I'm not sure I'd want to taste anything baked by Helen "every night is frozen lasagna night" Morgendorffer.

On this day in 1921, the first Miss America was crowned. Apparently the winner was not named "Darya," and in fact appears to have no Y in her name whatsoever. There goes that theory, I guess.

Got Any Books on Procrastination? 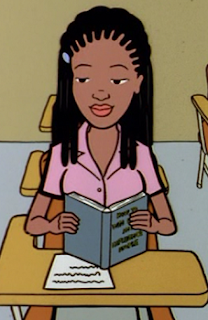 Jodie's all set for Read a Book Day, because Jodie always does what's expected of her. She does seem to be enjoying the book, though, so I'll leave her to it.

This is also Fight Procrastination Day, so if there's a book you've been putting off reading then today's the perfect day to start it. Unless you're only reading because there's something else you should be doing and you don't want to.

And the Award for Most Gratuitous Cameo Goes To.... 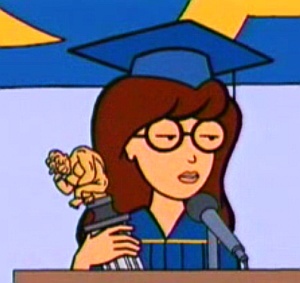 Daria and Jane appeared on the MTV Video Music Awards on this day in 1997, although if you blinked you probably missed it. Read the transcript to find out what they thought of the experience.

It's Dead Stacy Rowe Day! I know a handful of authors that probably enjoy this holiday, and at least one that most likely hates it. Still, it's a holiday created by TAG himself and is therefore worth mentioning. The question for all you fanfic writers out there is, how do you plan kill Stacy Rowe today? Quick and painless or slow and agonizing? The possibilities are endless!