Time to Start the Countdown!

Jane and Alison are ringing in New Year's Eve, but I hope one of Jane's resolutions is to turn down Alison's offer to go home with her to look at her pastels.

If you're wondering where Daria is, you might check with Carson Daly and see if she's doing a cameo on MTV New Year's Eve like she did at the end of 2001.

A Spicy Day for Texas

Someone should let Jake know that, even though it's Pepper Pot Day, he should probably take it easy on the pepper and other spices in the soup. He'd probably prefer his tongue not stay permanently black, after all.

This is also the anniversary of the day Texas was admitted to the union in 1845. If it hadn't been, Beavis and Butt-head would have been a very different show.

The Actress and the Misandrist

Barch is doing her best impression of the late actress Marlene Dietrich, who was born on this day in 1901. I'm not sure the two women have anything whatsoever in common aside from this alter ego, but Dietrich was born in Germany and "Barch" sounds vaguely German, so there's that. 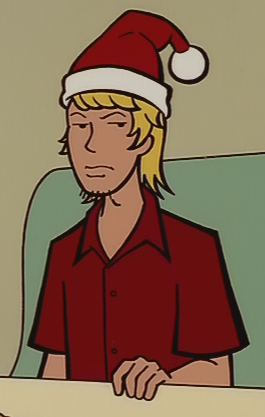 Christmas is still waiting for his sugar-coated cookies and little cottage all made out of gingerbread, but you go ahead and have a merry Christmas if you celebrate it. Whether you do or not, you may enjoy this list of Christmas-themed Daria fanfics:

Upchuck Out of Annoyance Range? It's a Festivus Miracle! 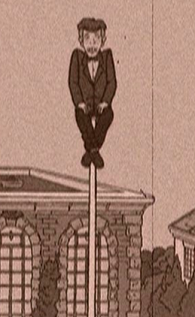 Happy Festivus, everyone! Upchuck's not enjoying the traditional aluminum pole, but I'd say that's a good place for him. Today's the day for Airing of Grievances and Feats of Strength, so have at it! Especially if they're directed at Upchuck over there. 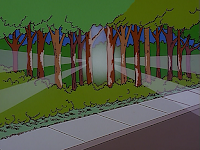 This is either a UFO sighting or the Lawndale gang is celebrating National Flashlight Day. It could be a very literal interpretation of Look on the Bright Side Day, but if Daria's involved then I doubt it. She's far more likely to be celebrating Humbug Day.

Here we see Daria with her fantasy-sequence boyfriend from the Beavis and Butt-head Christmas Special "It's a Miserable Life," which aired on this day twenty years ago. You can tell this is an alternate universe because Daria is singing and smiling. I'm actually a little frightened by this.

It was also on this day in 1997 that the movie Titanic was released, so feel free to grab your significant other and recreate that scene like they did in "Just Add Water." You know which scene; the one where the boat crashes and chaos ensues.

Quinn's prepared to recreate Orville and Wilbur Wright's famous flight, which happened on this day in 1903. I'm not sure if she's planning to do it because Sandi insisted she couldn't, or because Daria convinced her that windblown hair is now in fashion.

One of our favorite dysfunctional couples is impersonating a different well-known dysfunctional couple, Rhett and Scarlett, from Gone With the Wind. The film had its world premiere on this day in 1939, and apparently helped Quinn and Daria grow closer together in "Aunt Nauseam." Come to think of it, it also inspired Jane's "Oh, Scarlett, you grow lovelier by the day!" line in "I Don't" and at least one other alter ego. Someone working on the show must have been a fan!

For a Really Good Sugar Rush, Why Not Have Both?

Mack is less than thrilled about Ice Cream Day, but under the circumstances, who can blame him? Besides, at least where I am it's a bit cold to really enjoy ice cream.

As a warmer alternative, you could celebrate National Cocoa Day instead. According to Quinn, it's also good for calming down cute families of teens when they're stranded during hurricanes.

Tiffany's climbing up to observe International Mountain Day, although you'd think her experience in "Antisocial Climbers" would have scared her off the idea. Still, it's hard to look fat when you're next to a mountain, so you can't fault her logic there.

This is also the anniversary of the formation of UNICEF in 1946, so celebrate by not suing them like Helen and Eric did.

Mack shouldn't look so sad; today is his (okay, actually Kevin Daniels's) birthday! Daniels voiced Mack during the third season, one of four voice actors to portray the character. Maybe even pretending to put up with Kevin's antics was too much for any one actor to deal with.

Today is also the anniversary of Emmett Kelly's birth in 1898. Kelly is most known for his "Weary Willie" persona, recognizable for the sad face. It's quite possible that the crying clowns Tom and Daria saw at Art in the Park in "Art Burn" were at least based on Kelly. 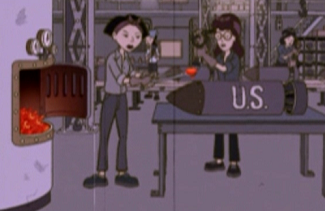 Daria and Jane are hard at work serving their country during World War II, because today is National Pearl Harbor Remembrance Day, which honors the victims of the attack on this day in 1941.

Brittany's here to celebrate Repeal Day, the day that Prohibition was repealed and alcohol could once again flow freely (not that it ever really stopped). Better grab a cold one before Kevin beats you to it!

Today also happens to be the anniversary of Walt Disney's birth in 1901, and without him and his cryogenically frozen head, the "I'm Going to a Picnic" game in "Road Worrier" would have been far less interesting.

A Roof is a Mixed Blessing 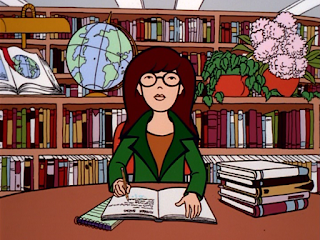 Daria's checking out the library roof for National Roof Over Your Head Day, and considering it's going to come crashing down in just a few minutes I think she's right to do so. If you have a roof over your head right now, be happy but also check it for cracks. Just in case.

Jake doesn't quite have it right--today begins National Eggnog Month, so he needs to pick the other carton. It might be a little harder to chug, though, and I don't think his cardiologist would like it, either.

If you decide to have some eggnog this month, just remember to check the expiration date. According to Jane, drinking out-of-season nog can cause you to hallucinate anthropomorphic holidays.