It's New Year's Eve, so get ready to party! If you're not into partying, you can curl up with Nemo Blank's epic The Mighty Quinn, which is set around New Year's Eve.

According to The Daria Database, several characters had a few New Year's resolutions that likely had varying levels of success:


Lots of fanfic potential in those, but I notice there are no resolutions from Jane. Do you have any resolution ideas for her or, for that matter, any Daria character? Post them in the comments!

And finally, the latest fandom news!

It's National Card Playing Day, so why don't we get together for a family card game just like we used to? Okay, fine, we've never played a family card game in our lives, but that doesn't mean we can't play a quick game of five-card stud. Jacks are wild.

The PPMB will be moving on December 30th. Check the thread for all the details, like when the board will be closed. Better start packing now!

The PPMB has successfully moved! Hooray!

Happy Boxing Day! Apparently today has more to do with giving to the poor than with pummeling people into oblivion, but I think this would be an excellent tradition to add to the holiday. Stacy's getting into the spirit, right?

Also on this day in 2004, the first entry was posted to the original Daria Fandom Blog, run by CINCGREEN. It may have ended a few years ago, but the legacy lives on in this very blog. Thanks, CINCGREEN!

Merry Christmas, everyone! While our friend X is forced to spread love and joy 24 hours a day and searches for one of those little cottages all made out of gingerbread, why not enjoy this list of Christmas-related Daria fanfics?

Posts might be a little sparser for awhile, because I'll be out of town for the next week. I'll try to keep up with updates, though, and there will still be posts showing up in the meantime.

It's a Festivus Miracle!

Happy Festivus! A holiday for the rest of us! Today we celebrate by the airing of grievances (left) and displaying feats of strength (right).

To my knowledge, the only Festivus Daria fanfic is Bettie and Jack at Festivus by Gene. If there are more, please do let me know and I'll add them here.

In the meantime, here's the latest fandom news:

Today is Yule and the Winter Solstice, as Mother Nature Barch is happy to tell us. I'm not sure Ms. Barch is really the most nurturing, maternal figure in the world, but maybe she just represents the less pleasant aspects of nature like the hurricanes and thunderstorms and violent misandry.

Also on this day, in 2002, Karen and Derek had a vow renewal/wedding reception in Richard Lobinske's Falling Into College fanfic "Christmas in White."

And while we're on the subject of fan-fiction, allow me to introduce today's fanfic update!

Every Time a Bell Rings, a Cynic Gets a Love Life

On this day on 1995, the Beavis and Butt-head episode It's a Miserable Life aired. In it, we learn that if Butt-head had never been born, Daria would be not only be much happier, but would also have a boyfriend (see left).

Makes you wonder what the show Daria would have been like under those conditions, doesn't it? For one thing, a happy, well-adjusted Daria probably would not have been placed in self-esteem class, so she would have been less likely to meet Jane. Which means--gasp!--we should be glad Butt-head was born, after all! Merry Christmas, you wonderful old garden gnome!

Okay, now for some fandom news: 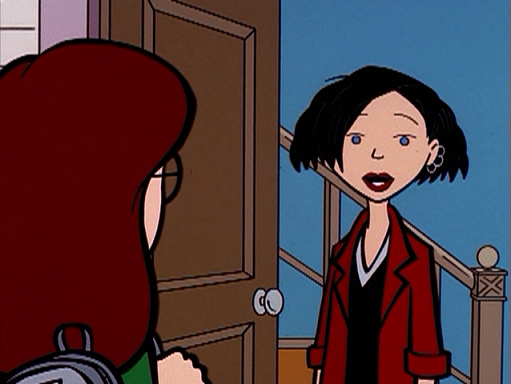 What did Jane see behind Daria? Post your answer in the comments.

Happy 61st birthday to Don Johnson, star of Miami Vice and impersonated by Kevin on the right!

Today is also Bill of Rights Day, established by Franklin Roosevelt in 1941 to commemorate the ratification of the Bill of Rights. Virginia, the final state to ratify, did so on this day in 1791.

I wonder if the Holiday Island versions of Bill of Rights Day and Human Rights Day ever hang out together?

As Seen on "This TV Movie about This Really Cute Family of Teens Who Got Stranded During a Hurricane"!

Hey, everyone! It's National Cocoa Day! Finally, a holiday I can support 100%. According to Quinn, it goes well with hurricanes, but I say you need not wait for a natural disaster. Don't forget the marshmallows!

While you sip, here's a fandom news update:

On this day in 1923, the now-retired game show host Bob Barker was born. That makes him...83? 91? 87? Ah, 87 was the closest without going over. Thanks for playing!
For those unfamiliar with the show The Price is Right, Jesse is demonstrating "The Big Wheel" game on the right. Get over there and spin that wheel!

Today is also the anniversary of the birth of Edvard Munch, the artist who painted The Scream. Born in 1863, Munch's work was most likely a significant influence on Jane, especially her "art colonies suck" period.

And now, finally, is the fanfic update!

It's Certainly better Than Inhuman Rights!

Today is Human Rights Day, created by the United Nations in 1948 to commemorate the Universal Declaration of Human Rights. The declaration sets out thirty articles that each define a recognized human right, including freedom from slavery, the right to peaceful assembly, and the right to education.

There's nothing to specifically relate this to Daria, although presumably Daria would be in favor of the declaration while Ms. Li would prefer to pick and choose from the articles. I just thought it was a neat holiday to share. Plus, I bet Human Rights Day is the most compassionate person on Holiday Island.

The globe on the left symbolizes both the global nature of the holiday as well as our shared right...to drink soda!

In a sad historical note, it was on this day in 1980 that John Lennon was assassinated. Even thirty years after his death, though, his influence is still going strong in the world.

There were only a couple of references to John Lennon and/or the Beatles in Daria episodes. First, in "Malled," Daria says, "If you play that John Lennon song backwards, it says, 'Imagine all the people, browsing in a mall.' Isn't that weird?" Second, in "The New Kid," Daria contributes to Ted DeWitt-Clinton's delinquency not just by giving him gum, but also by loaning him a Beatles cassette.

The Beatles are much better represented in fanfic. I was going to go through all the fanfic archives and find them all, but I realized three things.

All of these factors put together mean that I'm going to ask all of you to post about your favorite Beatles-related fanfics/fanart/other Daria stuff in the comments. Go nuts!

In the meantime, here's the fandom news update.

Of Trees, Concerts, and Fanfic

Today is the anniversary of the birth of the poet Alfred Joyce Kilmer, for whom Lawndale's public library (left) is named. Born in 1886, he is best known for his poem "Trees" ("I think that I shall never see / A poem lovely as a tree....").

Today is also the 55th birthday of Steven Wright, the comedian. Fans have speculated that the character of Luhrmann is based on Steven Wright because of their similar deadpan speaking styles. True or not, I bet Wright, Luhrmann, and Daria would get along fairly well.

Finally, the Altamont Free Concert took place on this day in 1969. The concert is mostly infamous for violence and deaths, thanks in part to the Hell's Angels being asked to provide security. According to "Road Worrier," Jake attended the concert. "Terrible tragedy, but I demanded my money back and I got it."

To my knowledge, the only time Jake's experience at Altamont has been touched on in any detail is in Gouka Ryuu's unnamed short scene. Lots of potential for fanfic there, though.

And speaking of which, howza about another fanfic update?

The End of the (Ig)Noble Experiment

On this day in 1933, the Twenty-first Amendment was ratified, which repealed the Eighteenth Amendment. The result was the end of Prohibition, which is why Flapper Jodie (left) is celebrating and Old-Timey Bartender Upchuck (right) is free to offer all of the alcohol you could want.

These and other alter egos of past eras made me realize that there are actually several fanfics out there that place the Daria characters in earlier time periods, also known as retrofics. The late, great Decelaraptor, who is still very much missed in the fan community, wrote quite a few of these: