Ready For Some Mischief? 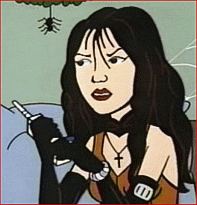 Halloween's big day is actually tomorrow, but she's happy to celebrate Mischief Night in the meantime. All she needs is some toilet paper, eggs, and someone who can drive. Oh, and possibly bail money. Just remember that if you decide to take all the toilet paper to TP anyone's house, please leave one roll for Jake. He really didn't appreciate it the last time. 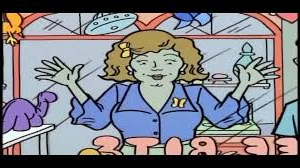 Mrs. Bennett will be right with you, as soon as she's done observing Plush Animal Lover's Day. We can have her attention back once she's appreciated every single Fuzzy Wuzzy Wee Bit in the store, which means we'd really be better off just moving on without her.

Speaking of grown women with unhealthy obsessions, today is also National Chocolate Day and--what? Oh, right, of course I was referring to Mrs. Johanssen. Not myself. Hey, is that unauthorized chocolate over there? Be right back.

Although not given a prominent role on the show, Dawn is helping us all to celebrate National Pumpkin Day! In fact, I think she gets more screen time as an alter ego than she ever did as an actual Daria character. Still, serving as a round orange vegetable makes up for it, right?

If pumpkins aren't spooky enough for your Halloween season, then you might prefer to celebrate Frankenstein Friday instead. Just remember two important facts: Frankenstein was the name of the scientist, not the monster; and no one likes a pedant. 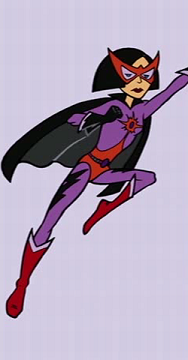 Jane is dressed in a just-different-enough-to-avoid-a-lawsuit version of the Batman outfit in honor of late comic book writer Bob Kane's birth on this day in 1915. She did say she wanted to be a bat, although she seemed more interested in sleeping upside-down and spreading rabies than in fighting crime. Still, she's finally getting her wish!

Today is also Food Day, so celebrate by eating food if you weren't planning to do that already. If you need some inspiration, this also happens to be National Bologna Day, so help yourself to some questionable meat-like product if you aren't too particular about what goes into your digestive system. 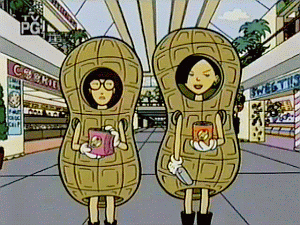 I think Daria and Jane should scale back their National Nut Day celebrations a little. They're getting just a tiny bit carried away. Of course, if Trent sees them then his brain really will get hijacked by peanuts.

Then again, it's possible that this is just an LSD-induced hallucination, which would be appropriate because today is the anniversary of Timothy Leary's birth in 1920. I have no idea how many more Learys the Yeagers have gone through by now, but I'm convinced that any amount is too many.

Sandi has once again missed the point when it comes to vampires, as she's clearly impersonating Gary Oldman's Dracula when it's Bela Lugosi's birthday. Oh, well--it could be worse. She could be Edward Cullen.

Or Is He Finally Growing that Goatee? 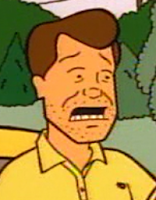 Jake hasn't gotten the memo that today is No Beard Day, or else this is just his weird way of sticking it to The Man. And by "The Man," I mean whoever came up with this holiday. Probably not greeting card companies, unless I've just missed all the No Beard Day cards. Maybe razor blade companies?

When Is Glass Ceiling Day? 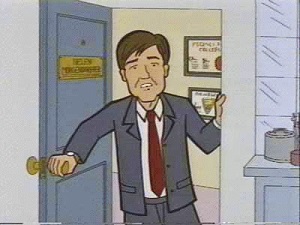 "Helen! Helen! Did you know that today is Boss's Day? I forgot to call and remind you to get me a greeting card!"

Of course, as far as Marianne's concerned every day is Boss's Day. I hope one day is Quit This Lousy Job Day for her, because no one deserves that much crap. I'm not sure if Max is excited because he just became a junior deputy or because it's Be Bald and Free Day. Max is the only bald character on Daria I can think of offhand, but if anyone knows of another then please share in the comments. Of course, just because a character seems to have hair doesn't mean said hair is real....

In tastier news, today is also National Dessert Day. Quinn's whipping up another layer cake for Kevin, while Mrs. Johanssen is going to have (what else?) chocolate. Mack will probably swing by with the ice cream truck later.

Meanwhile, Trent's Still Getting Paid NOT to Grow Crops

Today is Old Farmer's Day, and I think Helen would take exception to the "old" part of that. After all, she's only forty tw--four!

If she does get mad, that's appropriate too because today is also Moment of Frustration Day. Just remember that you only get one moment to be frustrated. After that, just repress your anger like everyone else! Works for Jake, right?

Don't Get Mental This Morning! 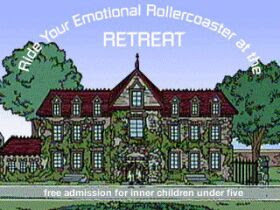 The fine people at Quiet Ivy want everyone to know that today is World Mental Health Day, so today would be a good day to have a check-up or get some other mental wellness support. Not at Quiet Ivy, though. That place sucks. I wouldn't recommend talking to Ms. Manson or Mr. O'Neill, either, which leaves you with...I don't know. Maybe a nice hike with Mr. DeMartino to calm your nerves? Just don't get him started on his job, okay?

THAT'S Not a Guitar Player! 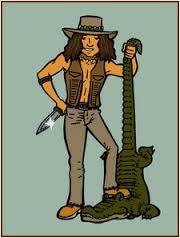 Everyone wish both a happy birthday and a g'day to Crocodile Dundee actor Paul Hogan, who was born on this day in 1939. Jesse actually looks pretty comfortable in this role, which makes you wonder what he's up to when he isn't performing with the Spiral. Anyone want to write that crossover fanfic?

A Very Merry Unbirthday to Kevin! 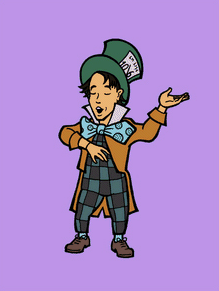 You know, it might make sense for Kevin to be as crazy as the Mad Hatter, but I'm afraid he's only dressed that way because today is Mad Hatter Day. During the other 364 days of the year, he's just dumb.

This is also World Card Making Day, but don't make Stacy's mistake and give your poems away for free!

Finally, because this is National Noodle Day, here's an extra warning not to let the penne a la pesto oxidize. Or let it get dumped on your head, for that matter.

Never mind the slim likelihood that Jesse would be an avid golfer, National Golf Lover's Day or not. Let's talk about the complete impossibility that the boy who hates shirts would ever wear an outfit like that. I think I can hear the Fashion Club screaming in terror already.

Today is also the anniversary of Daria's appearance on Drawn Together in 2007, but in Daria fandom we don't talk about that. We just don't.

Does She Do Windows?

Sandi's doing her best for National Custodial Worker Day, but I really don't think that's a practical uniform for the job. In fact, it could be disastrous if Upchuck sees her dressed like that--he'll either refuse to leave her alone or (if we're lucky) faint on the spot.