Andrea's expression is even stonier than usual as she emulates the Lincoln Memorial, which was dedicated on this day in 1922. If nothing else, she looks much more dignified than the Lincoln from Holiday Island High.

Upchuck is going to be pissed that Mack got the James Bond alter ego over him, especially because he's known to be a big fan of the character. In fact, he might even know that today is the anniversary of Bond creator Ian Fleming's birth in 1908!

If you're not into spy novels, then you could celebrate National Hamburger Day instead. The traditional way would be to eat one, but you might follow Daria's example by sticking it in your boots because you love the squishy, squishy feeling around your toes.

Finally, today is the anniversary of the episode Life in the Past Lane in 2001. We got to meet Nathan for the first (and, fortunately, last) time and also see Daria acting especially unpleasant, even for her. Good thing for her that Nathan turned out to be a jerk after all, I guess.

Jane's trying out a new artistic pursuit in honor of dancer Isadora Duncan, who was born on this day in 1877. As far as I remember, we don't really hear anything about what Jane thinks about art beyond visual arts, so it's up for debate whether Jane would actually be interested in Duncan's work.

Today is also the anniversary of John Wayne's birth in 1907, and I know that Jake at least will be interested. In fact, this might be the year he finally finishes that John Wayne collectable coin collection. Aside from the ones that slipped down the garbage disposal without any provocation. 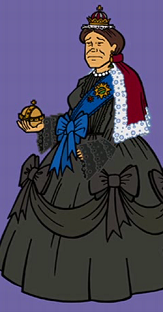 Jake's wishing a very un-amused happy birthday to Queen Victoria, born two hundred years ago today. Either that or he's trying out a new cosplay hobby, which in fairness is far safer than his interest in cooking.

Today is also National Escargot Day, so feel free to stop by Chez Pierre for their specialty. Or you could just join Daria and Jane for a pizza.

It's Complimentary, My Dear Mack Daddy!

Happy birthday to Sherlock Holmes creator Arthur Conan Doyle, born on this day in 1859! I don't think MTV could have thought up a less likely alter ego if they'd tried, and that's including the one where Tiffany is a Pokemon.

Today is also the anniversary of Laurence Olivier's birth in 1907, and to celebrate Jamie will perform a dramatic Shakespeare reading. Woe.

Bee Careful Around the Goth! 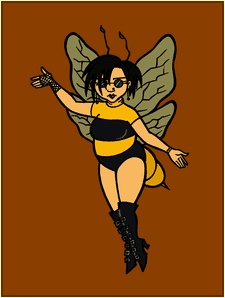 Andrea's taking World Bee Day just a bit too far, but I'm afraid to say anything because she might sting me. Daria will celebrate by staying far away from Jane and her rolled up newspapers, thank you very much.

Today is also Pick Strawberries Day, but I recommend you not try to take Lawndale's strawberry roadside attraction. Not only is it probably too big to pick, but the residents of Lawndale would probably get mad if you take their only claim to fame.

Don't Forget to Check Out the Sliced Man While You're There 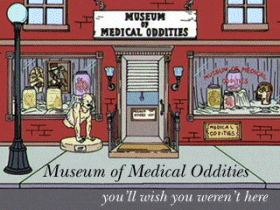 If you need something entertaining to do today, I recommend visiting the Museum of Medical Oddities in honor of International Museum Day. I mean, who could pass up an opportunity to see a real skull crusher?

But perhaps that sounds too fun. Perhaps you'd prefer to observe Visit Your Relatives Day instead! Uncle Max can call you a lousy, rotten bum and Grandma can ask what the hell is wrong with you. Good times!

Talk About Your Hidden Talents! 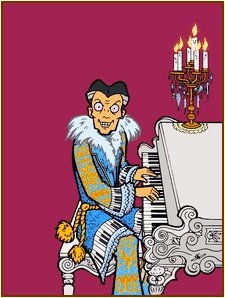 I don't know what to say about Mr. DeMartino's new look. I mean, he's actually smiling. Weird. But maybe that's to be expected when he's pretending to be Liberace on the 100th anniversary of the musician's birth. As for the clothes, well, no one said that he was going to use that raise wisely.

Meanwhile, on this day twenty years ago, an article praising Daria appeared in the The New York Times. For an outcast, Daria sure turned out to be popular.

Looks like Trent finally found a hobby worth staying awake for, just in time for Indiana Jones creator George Lucas's 75th birthday! I don't think anyone expected it to be fighting Nazis for mystical relics. Then again, the name "Mystik Spiral" should have been a clue.

I know that fandom has produced quite a few fanfic crossovers with Star Wars, Lucas's even more well-known work, but has anyone crossed Daria with Indiana Jones? If not, please do! 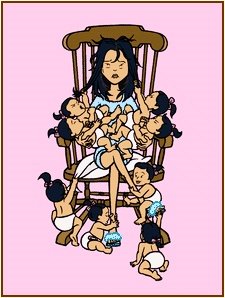 Today is also a (sort of) special day for Daria, because the calendar at the Morgendorffer house always seems to be turned to May 12th. I do not know why that day was so significant, but I'm guessing it was some animator's birthday or something.

Helen's chugging along to celebrate the anniversary of the driving of the Golden Spike on this day in 1869. I know we've got a couple of train enthusiasts in fandom, so this one is for you!

Today is also Clean up Your Room Day, so you'd better straighten up the cheese wedge and dust the sawed-off handrails and--what? You don't have any of that in your room? Huh. Weird. 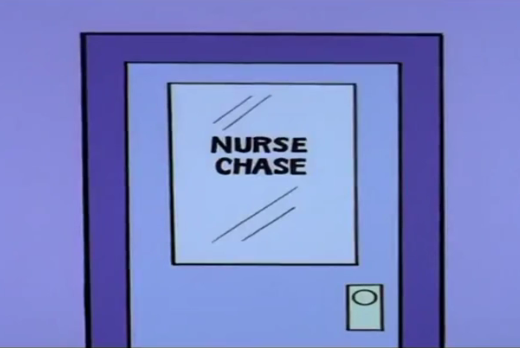 If anyone has a mysterious rash they need checked out, please head straight to Nurse Chase's office so she can go "Ewwww!" at it. While you're there, please remember to wish her a happy School Nurses Day! Also, ask her if she might consider leaving her office occasionally since she's never actually seen in any episode. 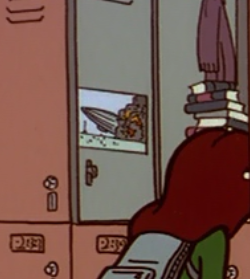 Looks like Daria is observing a moment of solemnity for the anniversary of the Hindenburg disaster on this day in 1937. Quinn had her own "Oh, the humanity" moment at the end of "Pierce Me," when Helen and Jake refused to believe her story about Daria's pierced belly button. Well-earned parental distrust vs. a massive hydrogen fire. Yeah, that seems pretty much even.

This is also National Beverage Day, so get out there and enjoy a nonspecific drink of your choice! Ms. Li's already got dibs on all the Ultra Cola, though.

I've gotta admit, firefighter is nowhere near the top of my list of potential jobs for Trent, even on International Firefighters' Day. As in, somewhere below Olympic athlete. I mean, if he didn't sleep through the fire alarm then he'd at least get distracted on the way to the fire because he came up with some new song lyrics.

Today is also Free Comic Book Day, so head over to your local comic book store and pick up the latest issue of Ratboy! I'm not sure why, but I could easily see Jake as a secret comic book fan. Stacy, too, come to think of it.

Everybody say "Awww!" to Future Quinn's youngest for Baby Day! Of course he or she would be cute, because Quinn's children would never turn out any other way. Not if they know what's good for them.

Today is also the day "Stonewall" Jackson was accidentally shot by his own men in 1863. There's no record if their actions were the direct result of being served Johnnycakes, but would Daria mislead us?