It Was a Good Day for Humorists! 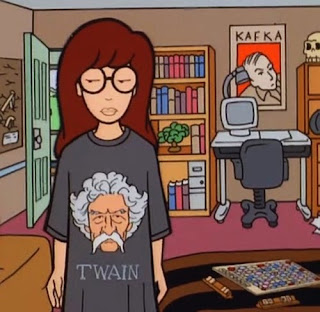 Daria's getting into the spirit (in a matter of speaking) because today's the anniversary of Mark Twain's (a.k.a Samuel Clemens's) birth in 1835! She was a fan of his work, including Tom Sawyer and Huckleberry Finn, but it's still open for debate whether or not he was responsible for creating Huckleberry Hound.

Speaking of famous satirists, today is also the anniversary of Jonathan Swift's birth on this day in 1667. Swift was known for his story Gulliver's Travels and his essay A Modest Proposal, the latter of which advocated for eating babies. Satirically, of course, but don't tell that last part to the Fashion Club. I'd love to see their reactions.

Looks like the Morgendorffers have gone for a fully traditional pilgrim Thanksgiving, unless Quinn just pissed Daria off once too many. For fans in the United States, have a happy Thanksgiving and enjoy your tryptophan coma! In the meantime, enjoy this list of Thanksgiving-themed Daria fanfics and feel free to add any I've missed in the comments. 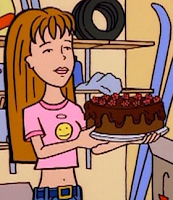 For once, Quinn and I are in agreement about celebrating National Cake Day. I don't know how she managed to bake and frost an entire cake without breaking a nail or burning down the kitchen, but I never turn down free chocolate cake.

Today is also Shopping Reminder Day, so Quinn had better put down the cake and get to Cashman's right away! Just set the cake down right here next to me. I'll take good care of it, I promise.

The Three Js have gotten a little too excited about All Our Uncles are Monkeys Day, which honors the anniversary of the publication of Charles Darwin's On the Origin of Species on this day in 1859. I don't know if those boys have any nieces or nephews, but anyone who has seen them fighting over Quinn would say the monkey comparison is accurate.

Jake's eager to celebrate National Cashew Day with his favorite nut, because "those are what the big guys eat!" Pick up a bag yourself from It's a Nutty, Nutty, Nutty World and be sure to say hi to Daria while you're there. Assuming she isn't hiding in the back room.

Also on this day, "Her, Uh, Cane" by paperpusher was posted on FanFiction.net. It's the earliest story on the Daria list, dated all the way back to 1998. How time flies!

No, Brittany, That's Not How Perspective Works, Either

Either Brittany is trying out a weird new cheerleading move or she's gotten a little too into Absurdity Day. She really needn't try so hard, though. Daria can confirm that any time spent conversing with Brittany feels like an exercise in absurdity.

This is also Universal Children's Day, but don't expect Daria to celebrate. Remember: "Forget it. I don't like kids. I didn't even like kids when I was a kid."

As Least Black is Slenderizing

Tiffany's digging into the deeper, darker mysteries of life for Occult Day. Such mysteries include why horizontal stripes make your butt look big, how shiny objects became shiny, and how to spell her own name. Good luck on your own search for answers!

Today is also National Vichyssoise Day, so Quinn will probably visit Chez Pierre for some cold soup. Of course, anyone who wants authentic French food should go somewhere else. Anywhere else.

Daria and Jane are way ahead of us for National Fast Food Day. The Fashion Club will pass on eating any of that greasy food, but if we're (un)lucky then Quinn might favor us with a dramatic reading of her poem "The Greasy Fry." For a hilarious fanart take on the Fashion Club's hypothetical adventures with fast food, see S-C's brilliant Burger World.

That's a New Way to Bring Glory to Laaaawndale High! 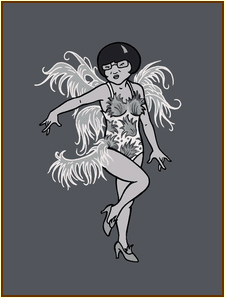 I see that Ms. Li wasn't kidding about that brief career as a dancer, but who knew she was also a Louise Brooks impersonator for Brooks's birthday? Of course, anyone who's seen pictures of the late actress/dancer knows that Jane's the one she looks the most like.

Ted's having a lovely National Pizza With Everything (Except Anchovies) Day, but he's clearly stunned to find out that some people actually put fish on pizza. Wait until he hears about the pineapple controversy.

Today is also Young Readers Day, and while Daria fandom is more young at heart than physically youthful, I know we have more than the usual share of readers. Crack open a book and have some milk and cookies, okay?

Sandi's showing off her new haircut in time for the anniversary of the United States Marine Corps, which was established on this day in 1775. For anyone who thinks there's no possible connection between military action and fashion, well, you've never seen Sandi and Quinn fight over a blouse at Cashman's.

On a lighter note, today is also the anniversary of the TV show Sesame Street, which first aired on this day in 1969. For an absolutely charming fanfic take on the show, see Mike Xeno's "D is for Daria."

Anyone See a Herd of Beautiful Wild Ponies Running Free Across the Plains? 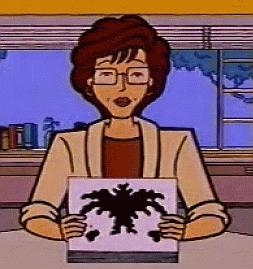 Daria's old school psychologist is wishing a happy birthday to Hermann Rorschach, born on this day in 1884. Rorschach is the creator of the inkblot test Daria took as a child, and later referenced in "Esteemsters." I'm not sure what he'd think of Ms. Manson's methods, but I suspect he wouldn't be a fan.

Today is also the anniversary of the births of Margaret Mitchell in 1900 and Brad--I mean, Bram Stoker in 1847. Both author's most famous works, Gone With the Wind and Dracula, were mentioned on Daria at various times.

Andrea is celebrating, albeit in a very stoic style, the election of Abraham Lincoln as president of the United States. I guess it's hard to feel celebratory when the personification of your holiday is a complete douchebag. Not to mention having to share a holiday with George Washington.

Either Mr. O'Neill knows that today is King Tut Day, the anniversary of the opening of King Tut's tomb in 1922, or he and Ms. Barch are into some really weird stuff. I hope it's the first one. Jake's still staring at that cereal box, trying to work out whether or not Tut was buried without his diver.

Today is also National Candy Day, so dig into that leftover Halloween candy stash! Daria and Jane might make another wager about the comparative quantity of ZooZoo Drops versus Juicy Joes. 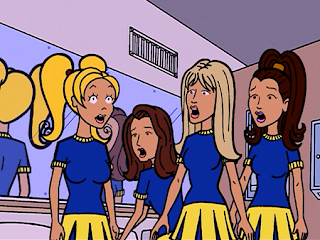 The Lawndale High cheerleaders are shocked to find out that cheerleading officially began on this day in 1898. That's right, cheerleading is old! Gasp! Horror!

For those not inclined toward cheering for athletes, today is also Book Lovers Day. I suspect most of Daria fandom will be celebrating this one, not to mention Daria herself.