What the Girl in the Box Read

Happy birthday to Anna Sewell, who was born on this day in 1820. Sewell wrote the book Black Beauty, which we see Daria reading during one of the flashbacks in "Boxing Daria."

I've often wondered why Black Beauty in particular was chosen for that scene. The message in the book about treating people with kindness seems like something Daria would have her doubts about, and she didn't seem to have any real affinity for horses. Then again, perhaps she was a horse enthusiast right up until she was thrown off one at Camp Grizzly. Whatever the reason, exploring Daria's interest in the book would be a cool fanfic.

And speaking of fanfic, here's the latest!

And If You Ask Nicely, They'll Even Thaw Out the Bread!

Happy National Mom and Pop Business Owners Day, everybody! Today we take time to appreciate people like Earl and Barbara (from "Camp Fear"), with their simple, wholesome cheese sandwiches and non-dip-fighting potato chips. Just try not to swallow the cellophane as you check out the latest in fandom news.

The picture for today's caption contest was provided by Arena del Sur. Thanks! 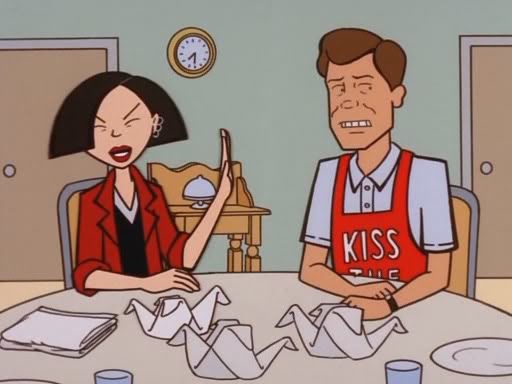 Bonus Points If Your Holiday Is Traditionally Celebrated with Cake!

Today is Make Your Own Holiday Day! This would be an excellent opportunity to add a new student to the ranks of Holiday Island High School, so go nuts. Please, though, no Mary Sue Appreciation Days. Let's spare Holiday Island at least one horror, okay?

I, meanwhile, will be celebrating Fanfic Update Day!

"Just like a man to be there one minute and gone the next!"

On this day in 1874, the magician/escape artist Harry Houdini was born. Upchuck's daring escape during the magic show in the episode "Life in the Past Lane" was presumably an attempt to emulate the performer, although I think even Houdini himself would have chosen to stay locked up once Ms. Barch started yelling and kicking the trunk.

Labels: fandom news, life in the past lane, upchuck

Quinn Probably Has the Same Reaction to Cotton-Poly Blends

On this day in 1905, Joan Crawford was born. Jodie, doing her best Crawford impression on the left, asks us all to remember that she prefers non-wire hangers as birthday gifts, please.

"I think I feel a poem coming on. (burps) Sorry, false alarm."

Let's all just take a moment to let the brilliance sink in, shall we?

Okay, enough of that. Now for the latest fandom news!

Seven years ago, in the late (and much missed) Guy Payne's fanfic Kadhimiya, Private Quinn Morgendorffer was killed in action. A sad but excellent story.

Today is also International Earth Day, not to be confused with Earth Day in the U. S.

"Green beer. And I don't even drink. It's congenital!"

Enjoy them with some green beer! Er, I hope that's food coloring.

Or, as it's more commonly quoted, beware the Ides of March! That's today, and if you see anyone in a toga who looks kind of shifty, you might want to move along. I figure that's pretty good advice any day, though.

For those who don't know, the warning was supposedly given to Julius Caesar because he would be stabbed to death on that day. Kevin has another theory, however:

Mr. O'Neill: All right, why did the soothsayer tell Caesar to "Beware of the Ides of March?" Who wants to "take a stab"? Kevin?

So watch your back and check out the latest fanfic!

Happy Pi Day, everyone! Today you can celebrate by deriving a circle's circumference from its diameter, calculating the value of pi to five million digits, or (like I plan to) cheating and just eating some pie.

I suspect that Jane, with her less-than-stellar math grades, will choose that last one as well. Although she might prefer a pizza pie, especially one with a pretty large circumference.

And now for some non-math-related fandom news!

Yet Another Caption Contest! 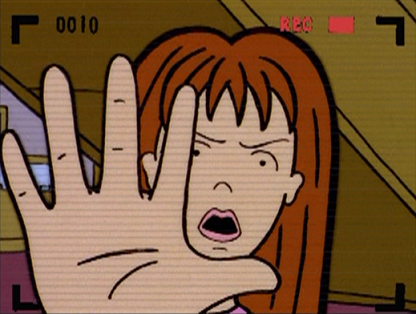 An Apple a Day Won't Keep the QB Away!

Today is Johnny Appleseed Day! Kevin's getting into the spirit, although he's probably just as likely to plant jelly beans as apple seeds. Whatever keeps him out of trouble, I suppose.

Anyway, have an apple and check out the latest fanfic update!

Back Before Sparkly Emo Vampires Were In Vogue

On this day in 1997, the TV show Buffy the Vampire Slayer premiered--one week after Daria. We know that Quinn is a fan from the episode "Speedtrapped" ("We'll be through the criminal justice system and home in time for Buffy!"), and there have been quite a few references to the show in various fanfics. A few authors have even crossed the two shows: Wyvern337's The Chosen One, Caira's Sculptures, and MFC's Daria the Vampire Slayer.