Today is Love Litigating Lawyers Day, although why the litigators are the only ones who get any love is anyone's guess. Still, Helen qualifies for this holiday and therefore I think we should all give her a great big hug. Unless she threatens us with a lawsuit--Daria must have gotten the idea from somewhere, after all!

Today is the 53rd anniversary of Michael Jackson's birth. The late pop star was born on this day in 1958, and for better or worse he made a huge impact on the world. A few fans have done Daria fanart related to Jackson, including breitasparrow's Thriller Bowl and Elryd's Michael Jackson Mackenzie.

Also on this day, the Admonisher published his essay A Rant About "Evil" Tom in 2000. It's a bit strongly worded, but definitely worth a look--whatever your feelings about the character may be.

Still Waiting on that Sequel

Happy birthday to Leo Tolstoy! The Russian novelist was born on this day in 1828, and Daria canon has this to say about him:

Mr. O'Neill: Now, why do you think it is that Tolstoy felt he had to make War and Peace so darned...unpleasant? Daria?

Daria: So no one would pester him to do a sequel?


Hard to tell from that comment whether or not Daria is herself a fan of Tolstoy. It's a good bet her Aunt Amy is, though, given Rita's remark about her "reading those weird Russian novels."

Maybe Someone Could Turn Down the Sun

It was eleven years ago today that the first Daria movie, Is It Fall Yet?, aired on MTV. Not only did the Jane-Tom-Daria thing get resolved (or at least resolved as much as it ever did), but Quinn also finally got a ton of character development. There were a lot of great comic moments throughout, as well. One of my favorites is DeMartino's triumphant "I'm going for a hike!" scene. What's yours? Share it in the comments.

Labels: is it fall yet?, lots of new and continued fanfiction

Note to Brittany: Do NOT Pick Your Nose!

A very happy and/or creepy (his choice) birthday to director Tim Burton, born on this day in 1958. Among Burton's best-known films are Beetlejuice, The Nightmare Before Christmas, and Edward Scissorhands. Brittany's alter ego on the right is the title character of that last one, although I can't imagine how she plans to hold her pom poms now. At least Kevin may think twice before cheating on her ever again, but on the other hand, it's Kevin--I seriously doubt he ever even thinks once about anything.

An Interview with the Cynic

The "Insider" column "Daria on Fame, Fortune and Film" appeared on this day in 2000, shortly before the premiere of Is It Fall Yet? In it, Daria discussed her life, her goals, and her love of yo-yo tricks. Check out the transcript of the article on the Outpost Daria page, although the link to the article itself is broken.

It's a Writer Birthday Two-Fer!

Happy birthday to both Ray Bradbury and Dorothy Parker, born in 1920 and 1893. Jake appears to be portraying The Illustrated Man, one of Bradbury's short story collections, on the right. Also, I bet you anything that Daria would be a fan of Dorothy Parker, thanks to the writer's sharp wit and gift for satire.

Bring Out Your Captions! 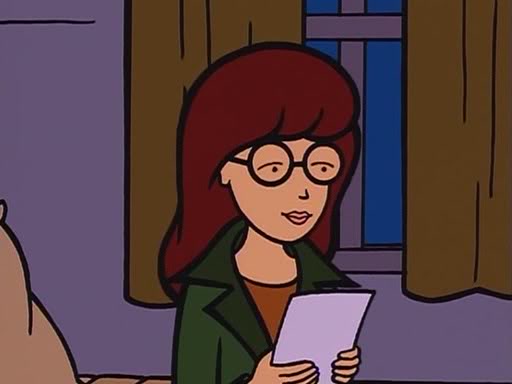 Why is Daria smiling? Post your captions in the comments!

Do Potatoes Have Low Self-Esteem?

Today is National Potato Day, so Mr. O'Neill is doing his part to celebrate. Today also happens to be National Aviation Day, and if you combined the two holidays I suppose you'd get flying potatoes. Perhaps a potato gun is in order? If Mr. O'Neill is involved, I'm all for it.

Also, happy birthday to both Gene Roddenberry and Bill Clinton, born on this day in 1921 and 1946, respectively. One gave us Star Trek and the other gave us never-ending cigar jokes. Good times all around.

Today is the anniversary of either a major fandom high point or a major fandom low point, depending on your perspective. On August 18, 1999, Tom Sloane made his first appearance in the episode "Jane's Addition." Some fans love him, some fans hate him, and some fall somewhere in between. You can't deny, however, that the boy was controversial. And I refuse to even mention The Kiss. (Oh, wait, I just did. Dammit!)

This is also Bad Poetry Day, and never has this little gem been more appropriate to post:

Happy birthday to Madonna, born on this day in 1958! Helen's doing Madonna's famous "Vogue" pose on the left, which is one of several Daria alter egos related to the singer.

Fan artist Kemical Reaxion has also done a series of drawings showcasing Madonna's various "faces" using Daria characters, which is worth a look whether you're a Madonna fan or not. Enjoy!

"Why are we going to Alternapalooza? Ugh. Isn't that for girls who don't shave?"

The rock concert Alternapalooza, mentioned but not actually seen in "Road Worrier," began on this day in 1997 (maybe). Although the gang didn't make it there in canon, Alternapalooza has been featured at least in some form in plenty of fanfics, including:


While you check those out, here's the latest fandom news!

Happy International Lefthanders Day to you all! Brittany is still figuring out whether or not she's included in this celebration, but for all of you who didn't get forced to switch in remedial art, right on! Er...I mean, left on! Oh, you know what I mean.

Today is also the anniversary of Alfred Hitchcock's birthday. Born in 1899, Hitchcock was a filmaker known for his mastery of the suspense genre. The only canon reference to the man I've been able to dig up was Tom inviting Daria to the Hitchcock Festival to see Rope in Is It College Yet?. Surprisingly, I have been unable to uncover any Hitchcock crossovers in fanfic, either. Can anyone prove me wrong? And if not, what are you all waiting for? Start writing!

Today is the anniversary of the birth of Erwin Schrödinger, who might have had a cat. Or maybe he didn't. Either way, he was born in 1887 and his famous thought experiment was the main inspiration for The Angst Guy's fanfic Schrödinger's Tiger. So really, everyone wins...except maybe the cat.

Happy birthday to the late Henri Nestlé, born 197 years ago today. He was the founder of the Nestlé company, which makes (among other, less important things) chocolate. Sure, it may not be at the top of everyone's list for quality, but some of us aren't too terribly discriminating about it.

Besides, as Jane Lane will tell you, the only kind of chocolate worth eating is unauthorized chocolate. Bwa-ha-ha-ha.

Happy Frank Zappa Day! Technically it's only a holiday in Baltimore, but if Lawndale is really a suburb of that city, then I think it's actually even more appropriate!

Just remember to listen to Zappa on vinyl, or you might miss the rich tone as he sells fish sticks. Standing on aluminum foil is optional.