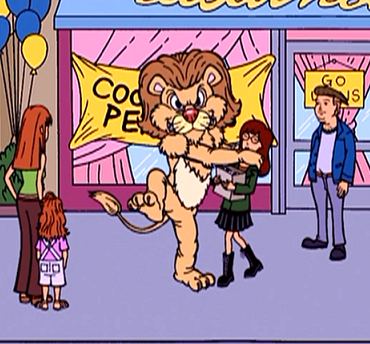 Daria's reluctantly celebrating International Dance Day, although I give her about ten seconds before the lion gets a good, solid kick someplace unpleasant. I could never figure out why (spoiler alert) Mr. O'Neill kept singling Daria out, but maybe it's better not to think too much about it.

Today is also Arbor Day, so take the opportunity to plant a tree. Or a memorial crutch. Your choice.

I Hope She's Not Expecting Any Time Off Marianne just wants to let everyone know that today is Administrative Professionals Day, and I'm sure she'll be getting some kind of card or gift from Helen. Too bad Helen probably asked Marianne to pick it up and sign her name for her. I suppose it's the lack of thought that counts.

At Least She Remembered Her Lipstick

Sandi's taking things a little too far for World Penguin Day, unless maybe she greatly misunderstood what Waif meant by having a cool outfit. Penguins have a long and (cough) notorious history as a fandom in-joke, and I think it would be best to leave it at that. This is supposed to be a family-friendly blog, after all.

Is This a Book I See Before Me?

Mack's wishing a very happy birthday to William Shakespeare, who was born on this day in 1564. Shakespeare's plays get too many in-show references for me to start listing them out, but go ahead and share your favorites in the comments!

Appropriately enough, today is also World Book Day! Celebrate by reading one of Shakespeare's plays, or anything else you feel like reading. Daria's got dibs on Black Beauty.

As if having their own holiday wasn't enough, now President's Day is moving in on National High Five Day, as well. Oh, well. I bet Kevin really likes this day, too, although it wouldn't surprise me if he gets left hanging on a regular basis.

Brittany's going all out for Dutch-American Friendship Day, although I seriously doubt she knows much, if anything, about the Netherlands. If you asked her I suspect you'd get an answer related to Peter Pan. Unless Lawndale High hosted an especially cute Dutch exchange student at some point, I suppose. Brittany really seems to like those foreign exchange students. 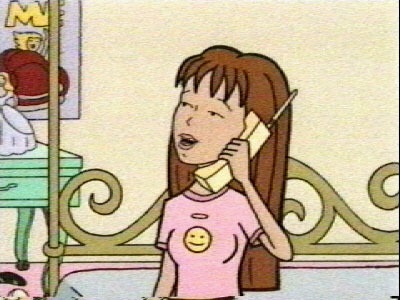 As Certain as Art and Taxes 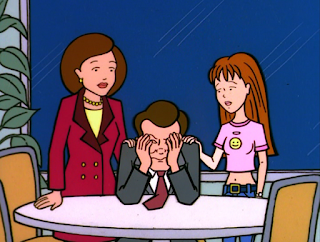 Jake's feeling a little upset because he only just remembered that taxes are due today. I think he's in for a long, stressful day.

Meanwhile, Jane is probably celebrating World Art Day by either painting or appreciating some of her favorite artists. Among them might be Leonardo da Vinci, who was born on this day in 1452.

Props for the Bingo, Though

Daria and her parents are celebrating Scrabble Day, or maybe Helen and Jake simply made the unwise choice to ground Daria again. I feel kind of sorry for Daria, though; that's an impressive word to play, but she just barely missed the triple word score. Such a shame.

Someone needs to explain to Jeffy, Joey, and Jamie that today is Barbershop Quartet Day, which means there should be four singers, not three. Maybe they can get that guy Jeremy or Jerome or whomever Quinn's always talking about to join in.

Today is also National Submarine Day, which is a great opportunity to promote the late Guy Payne's awesome fanfic, "The Blue and Yellow Submarine." 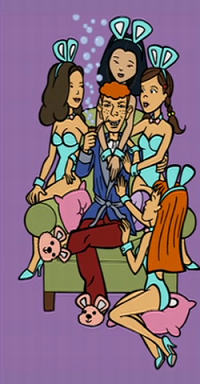 But How Many Bottles Are on the Wall?

Brittany's ready to celebrate National Beer Day, and if she hasn't stocked enough for everyone then we can also send Quinn, a.k.a. Keg Queen, out for reinforcements. Unless she's too busy cleaning the house steps with a toothbrush.

Today is also the anniversary of two Daria episodes, "This Year's Model" in 1997 and "I Loathe a Parade" in 2000. I guess we'll never know if Jake ever got his hands on some toilet paper.

Daria and Tom look surprisingly sad for National Deep Dish Pizza Day, but perhaps that's just because they ordered thin crust by mistake. Everyone else out there can take the excuse to have some pizza today, but watch out for cheese burn and excess grease.

I don't think Daria is enjoying World Party Day very much, but everyone else seems to be having a good time. Jane's probably still in the laundry--I mean, make-out room, so the same could probably be said of her.

I Don't Pity This Fool

I can't think of anyone more appropriate to wish everyone a happy April Fool's Day than the biggest fool at Lawndale High, Mr. O'Neill. I have to say, the look is very fitting. Just remember not to believe anything anyone tells you today. Except for what I just told you.

We're still all waiting on that inanimate objects uprising Jane predicted, but I'm starting to think we're safe after all. Unless that's what they want us to think...!