Happy Hawaiian Flag Day! Stacy is celebrating in the traditional fashion on the right. Today is also J.K. Rowling's birthday, and the well-known Harry Potter author is turning 46 today. There's an awful lot of Daria/Harry Potter fanfic out there, so many that I'd probably never successfully list them all. If you've written one, or have a favorite, post it in the comments!

"If I don't come back, remember to take the plastic lid off the lasagna if you cook it in a conventional oven."

Of course, according to the 1998 "Daria Day" Marathon, what the Morgendorffers almost constantly have for dinner isn't actually lasagna. "Those are actually concentrated protein and starch nutrition squares. You see, as two dimensional cartoon characters, we have very fragile digestive systems and need to take nourishment in this manner."

So enjoy your concentrated protein and starch nutrition squares as well as this fanfic update!

Jacqueline Kennedy Onassis was born on this day in 1929. A somewhat minor reference to her was made in canon, when Jane refers to Quinn in her scarf-and-sunglasses disguise as "Quinnie O." This alluded to "Jackie O's" frequent mode of dress after her marriage to Aristotle Onassis.

TAG has pointed out before how the outfit Stacy is wearing in her alter ego is the same one the former First Lady was wearing when John F. Kennedy was assassinated, which is...odd.

Today is also the day that the episode "Speedtrapped" first aired in 1999. The Spiral did some time in the joint as "criminales," Quinn revealed her hidden talent at driving, and Daria developed a taste for country music. I'm always amused by that fake bump right after Daria suspects Travis of stealing their money, but then again I'm usually easily amused anyway.

Eleven years ago today, the episode Fire! first aired. Jake almost burned down the Morgendorffer house and the Daria/Tom/Jane triangle (pauses for booing and thrown vegetables) took another step forward. We also got to meet Bobby, Quinn's would-be computer geek/stalker, and hear the immortal line: "He's not a stalker, he's just enthusiastic!"

In my opinion, not enough has been done with Bobby's character. Was Quinn right or was he truly dangerous? Could he have tried this stunt with other girls in Lawndale, or out-of-town visitors? Will his computer hacking skills one day allow him to rise up as leader of the whole world, ruling with an iron fist and those cute little plastic sandals you get in the spa that massage your feet when you walk?

Could be worth a thought, anyway.

Just Can't Get Enough of Those Random Holidays!

Happy Thread the Needle Day, everyone! Jake would like to request everyone's assistance, but look out for that pissed-off camel.

I'm trying to imagine what Holiday Island's version of Thread the Needle Day would be like. Probably really, really interested in sewing.

"How does hot dog jalapeno hotties sound for tonight?"

Today is National Hot Dog Day! Today would be a great day to order that crate of bulk rate hot dogs you've been wanting, so go to town and remember to save some for the Hot Diggity Dog Eating Contest. My money is on Mr. DeMartino. Look at him; you can tell he just wants it more.

Rats and Pi...but not Rat Pie!

Happy Ratcatcher's Day! Whether they're on Ritalin or not, those little guys apparently need catching. Hey, I wonder if The Ratcatcher would be Ratboy's arch nemesis? I suppose we'd have to ask Kevin.

Today is also Pi Approximation Day, so those of you who missed Pi Day earlier this year can now have some pie--or at least something close to it.

One Small Step for an Overachiever....

On this day in 1969, Neil Armstrong became the first person to walk on the moon. Jodie follows in his footsteps on the left, although it may be part of yet another extracurricular activity. Vice President of the Moonwalkers Club? I suppose it beats shredding documents for congressmen.

Labels: jodie as an apollo moonwalker, lots of new and continued fanfiction, moon

"I mean, I have a guardian angel, too. I just don't brag about it all the time."

Eleven years ago today, the episode "Groped by an Angel" first aired. There's a lot to comment on about the episode, from the lightly-touched-on religious issues to Brittany's family to Trent's surprising knowledge of algebra. Rather than try to put together a detailed critique of the episode, I'll just take the lazy route and open it up to you all to talk about in the comments. What did you like about the episode? What did you hate? What made you think? What made you laugh? If you could be a nail polish, what color would you be and why?

Disneyland opened on this day in 1955, which is why Jane is dressed as Snow White on the left there. Let's just hope she doesn't actually try to do any singing, or else those cute little woodland creatures might turn feral. There aren't any explicit references to Disneyland in canon that I could find, but there are several nods to Disney in general in various episodes:

In "Speedtrapped," upon learning that Mystik Spiral's world tour consists of a gig 100 miles away, Daria replies, "It's a small world after all." If you didn't already know, that's from one of the rides at Disneyland...and good luck getting that song out of your head any time soon.

"Sappy Anniversary" finds Daria comparing herself to the donkeys in Pinocchio and is advised by Jane to "Always let your conscience be your--" before Daria tells her to shut up.

Even the special "Look Back In Annoyance" gets in on the act with Jane's comment, "Hey, we're gonna be out of work soon. I'm trying to get a job with Disney." I'd love to see what Jane's Disney animation work would look like.

Happy birthday to the late Ginger Rogers, born on this day in 1911. She was known best as Fred Astaire's dance partner in many movies, in which she "did everything Fred Astaire did, but backwards and in high heels." I love that quote.

The Landons are doing a pretty good impression of the famous duo on the right. I almost didn't recognize Michele with that smile on her face!

Happy Bastille Day! It's France's national holiday, which commemorates the anniversary of the storming of the Bastille in 1789.

Brittany seems pretty into the holiday, although that might have something to do with that lonely exchange student to whom she gave an American goodbye. Come to think of it, could the exchange student have actually been Bastille Day, visiting from Holiday Island? Or do I just need to get more sleep?

Ah, well. Whatever you do, don't get too close to Brittany while she's holding that sword!

David and Quinn share their thoughts on Bastille Day in Is It Fall Yet?:

Today is Embrace Your Geekness Day, and Mr. DeMartino is getting into the spirit! Although I suspect the holiday is meant to celebrate the more mundane, non-circus type of geek--you know, Monty Python, sci-fi, role-playing games, and other stuff the Fashion Club wouldn't touch with a ten-foot pole. Although cfardell_Brenorenz29's AU version of Quinn probably would.

Both Popular and Unpopular Population!

Today is World Population Day, and a good-sized chunk of the population of Lawndale (or at least the people who get speaking roles) have turned out to celebrate. They appear to be singing, though, so I'd advise keeping your distance from the festivities to be on the safe side. 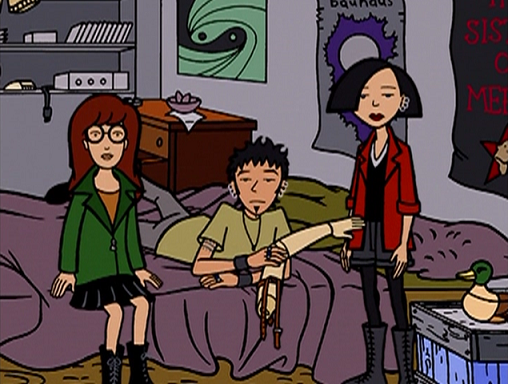 What's going on here? Post your caption in the comments!

So, Do I Get the Day Off Work or What?

Happy Bowman Day, everyone! Okay, technically it's a made-up holiday in Daria fanfic, but what makes it any better than one of those made-up holidays in real life? I rest my case.

I admit I have no idea how Bowman Day is traditionally celebrated, but suggestions are welcome in the comments section.