Mack is giving it his all on the trumpet in this alter ego of Dizzy Gillespie, the famous jazz musician. That's because today is International Jazz Day, so all you jazz fans out there have an excuse to dig out your favorite albums.

Does This Moon Make Me Look Faaaaat?

Tiffany is doing a bit of stargazing in honor of International Astronomy Day, but she's going to be disappointed: none of the stars she'll find are likely to be shiny enough to check her makeup in.

Want a Hug? No Worries! 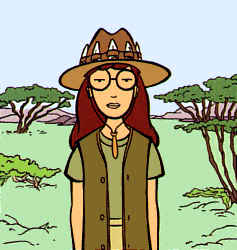 Daria's in her Outback outfit to tell us that today is Hug an Australian Day, and also that you can keep your damn hands to yourself, thank you very much. To all the Australian Daria fans out there, take a hug if you'd like one, or have a friendly nod from a distance if you'd prefer.

Jake's got the hot dogs all set up for National Pigs-In-A-Blanket Day, although from the looks of things he's only halfway there. Still, from DeMartino's expression I think those hot dogs aren't going to be around long enough to finish assembling, anyway.

I Kant Believe It! 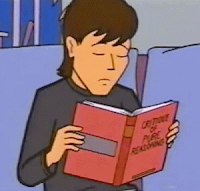 Tom is falling asleep over Critique of Pure Reason, the most well-known work written by philosopher Immanuel Kant. Kant was born on this day in 1724, and from a certain perspective you could claim that he is directly responsible for all those rumors about Daria and Tom having sex in "My Night at Daria's." Shame on you, Mr. Kant. Shaaaaame.

Have a Very Feisty Easter!

Upchuck wishes everyone who celebrates it a happy Easter! The Fashion Club, on the other hand, wishes they could escape from Upchuck's fantasy sequence.

As a special holiday treat, check out these Easter tidbits courtesy of Mistress Thea and the Sh33p's Fluff website:

Quinn is eagerly reading Kara Wild's fan-fiction series the Driven Wild Universe, which premiered on this day in 1999. Quinn--for those unfamiliar with the series--is a major focus in the stories, so it's no wonder she's suddenly so interested in reading.

Happy birthday to The Tramp! Settle down, Quinn, no one's talking about anyone in the Fashion Club. It was on this day in 1889 that Charlie Chaplin was born! Mr. O'Neill only wishes he were as talented as Chaplin.

Or Maybe She's on Candid Camera 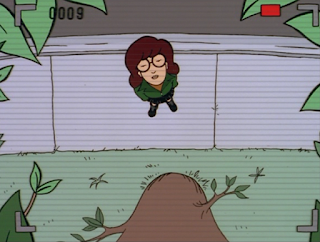 Daria's gazing up because it's Look up at the Sky Day. Or she's looking up because those pervert squirrels are back. Not sure which.

Today is also the anniversary of two episodes, "The Lab Brat" in 1997 and "Of Human Bonding" in 2000. Have a favorite moment from either episode? Share it in the comments!

A Space for Yuri

Today we celebrate Yuri's Night, which honors space exploration in general and cosmonaut Yuri Gagarin in particular. It was on this day in 1961 that Gagarin made the first human spaceflight in history.

I know we have several space travel enthusiasts in fandom, so feel free to geek out in the comments.

Jesse is practicing his swing today because it's Golfer's Day, which is probably one of Jake's favorite holidays. If you want, why not take on a few holes yourself today? If you're not a golfer, you can always take a page from Mack's book and bludgeon Kevin with a club instead. I'm sure it's very therapeutic. 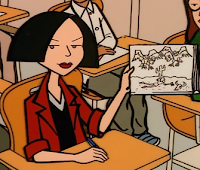 Jane is showing off a sketch she made just for Draw a Bird Day. Vultures based on human scam artists might not be precisely what the creators of the holiday had in mind, but it works for me. 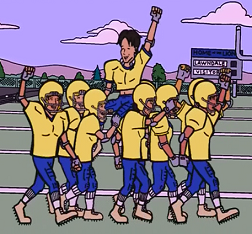 Kevin and his teammates are partying hard for National Student-Athlete Day, because in the words of Jane Lane, "it's not how hard you study, it's how hard you play football!"

You know, looking closer at that picture, it's not really clear how, exactly, the other players are holding Kevin up. Perhaps Kevin has learned the art of levitation? Hmmm.

Tiffany is trying to finish her flag in time to celebrate the anniversary of the current American flag design--thirteen stripes and one star for each state. I pretty much guarantee that Tiffany's flag will have the wrong number of both, and we'll be lucky if she gets the colors right.

Daria's diving into an old favorite in honor of International Children's Book Day, so why not take the opportunity to reread one of your beloved childhood classics, as well? If you'd like, share what your favorite books were as a child--or other books you think Daria might have enjoyed--in the comments.

Switching from words to pictures, today is also the anniversary of the episode "Art Burn," which aired on this day in 2001. Jane learned how to paint copies and perform undercover missions in a single episode!