Poison in the Sloppy Joe Mix

The episode "Gifted" first aired on this day in 1998. In it, Daria and Jodie decided to stick with the idiots at Lawndale High over the idiots at Grove Hills. We also met Jodie's parents and saw Quinn inflict her personality on Jane for an entire night. No wonder Jane was at the breaking point the next morning.

A few AU fanfics have explored what might happen if Daria were to attend Grove Hills. Charles RB wrote Grove Hell on Earth and a sequel, Grove Hell 2: All the Lawndale People, in which Daria starts at Grove Hills upon arriving in Lawndale. Ajar wrote Regifted and an unfinished (jab, jab) sequel, Regifted 2: I Put Away Joyless Things, which branches off from "Gifted" and shows both Daria and Jodie attending Grove Hills from that episode onward.

Stacy is in her boxing gear to commemorate the infamous boxing match between Mike Tyson and Evander Holyfield that took place on this day in 1997. In the match, Tyson bit off part of his opponent's ear. Check out Stacy's game face there--hope Sandi is wearing earmuffs.

Today is also the day the episode "Psycho Therapy" aired in 2000. There were lots of great moments in that one, including Quinn's regression into Cleopatra, Jake and the milk, and Helen's "Quinn...well, I can't even think about what happened there, not right now." Not to mention Tom shaking it for all the world to see!

Finally, happy 85th birthday to Mel Brooks, born on this day in 1926. I know there are at least a handful of Brooks fans in Daria fandom, so let's all wish Mr. Brooks a good one. I was going to pick out a quote from one of his movies to go here, but there are just so many hilarious lines that I can't choose. If you like, post your favorite in the comments!

"The Revolution Begins with Us"?

Happy anniversary to Helen and Jake, married on this day in 1975. Read their complete vows, which they have just done a bang-up job following through on. Cough.

Mike Yamiolkoski wrote an excellent fanfic, Committed, that makes excellent use of those vows and their repercussions. I won't say anything more specific, but read it now if you haven't already! (And if you have read it, go read it again!)

Poor Helen probably has pretty low expectations for today, considering Jake's past history. Hopefully he's learned a few things since their first anniversary--maybe this time the candle will actually look like a hobbit. God help Jake if he forgets the day entirely, though!

Congratulations on thirty-six years of marriage, Helen and Jake! In the wise words of Aunt Amy, that shows remarkable fortitude.

"Um, from here it looks like exactly a box."

It was ten years ago today that "Boxing Daria," the last regular episode of Daria, aired. It was a much more serious episode than usual, not only because it dealt with Daria's difficulties as a child but also because it included more dramatic elements like her near-accident in the car and her serious talk with Jane afterward (which started with an unusual--for Daria--hug).

It did have its moments of humor, though. Jane's "I need some chocolate. Unauthorized chocolate," and Quinn's "Stupid freaking carton...hard freaking labor...I'm only freaking human! How much can one freaking girl take? Even an enormously freaking popular one...." lines still make me laugh. Also, having the "herd of beautiful wild ponies running free across the plains" bit come full circle was a nice touch.

A few fanfic writers have done stories that deal with the events of the episode in different ways:

While you enjoy those, I'll update the latest fanfic!

It was fourteen years ago today that the Air Force released a report on the infamous Roswell UFO Incident of 1947. According to the report, the "aliens" sighted were actually test dummies. Do you believe them? All I know is, even test dummies would be more intelligent life than Tiffany is.

On this day in 1944, President Franklin Roosevelt signed the G.I. Bill into law. It offered support to returning soldiers who wished to pursue their education, among other things. Unfortunately for Trent, I don't think any colleges--then or now--included "Sleeping with a Guitar in Your Hands 101" as a course.

Happy birthday to both Carson Daly, born in 1973, and Cyndi Lauper, born in 1953. Carson Daly voiced the character David Sorenson in the movie Is It Fall Yet?, in which he attempted the impossible--teaching anything to Sandi, Stacy, and (gulp) Tiffany. Kudos to you for trying, you brave soul!

Cyndi Lauper and Metalmouth would both like to remind you all that Girls Just Want To Have Fun! Don't worry about that noise outside the car. It was probably just raccoons or something. Feel free to let your guard down, okay?

Most importantly of all (in my opinion, anyway), today is National Chocolate Eclair Day! A chocolate eclair was featured in The Angst Guy's Feeding Frenzy, although for some reason the characters in the fanfic had their minds on...other things.

Today is Go Skateboarding Day, which Daria is observing with uncharacteristic glee on the right. I don't remember much (if any) skateboarding in canon, but I'm sure Kevin would find a way to injure himself in hilarious ways while on a board.

Also, the Northern Hemisphere will experience the Summer solstice today, at 17:16 UTC. At that time, the Earth will be tilted on its axis toward the sun at maximum. That means it will be the longest day of the year as well as the official start of summer. Party on!

Finally, and not to be forgotten, Cyrus Hall McCormick, Sr., patented his mechanical reaper on this day in 1834. Why is this important? Why, because how else will Daria get the most she can out of her college education?

Lisa: But what are you hoping to reap from your Bromwell experience?

Have a Good One, Jake-O!

Happy Father's Day, everyone! Jake will probably celebrate by reading the paper, drinking martinis, and ranting about Mad Dog. How that differs from any other day is anyone's guess.

Ten years ago today, the episode "My Night at Daria's" first aired. (Just as a head's up to the DariaWiki folks, the airdate is listed correctly in one place as June 18th in the article and incorrectly in another as June 11th.) (ETA: Now fixed. Thanks, TheExcellentS!)

The episode gave us a graphic portrayal of the passionate night Daria and Tom spent together, as you can see on the right. Hawt.

And Speaking of Electricity... 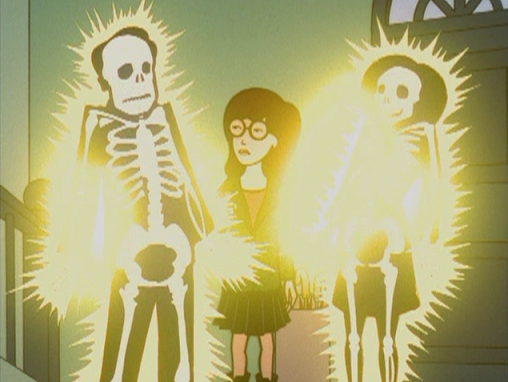 On this day in 1752, Benjamin Franklin supposedly performed his famous kite/electricity experiment. Anthony DeMartino is attempting to recreate it, but that lightning can't be good for his eye.

Another significant event happened in fanfic ten years ago today, in Angelinhel's story 61501. Read the story to find out what it was, but you might want to brace yourself.

Today is Flag Day in the U.S., which commemorates the day in 1777 that Congress adopted the United States Flag. The number of stars on the flag has changed quite a few times since then, which is probably why Tiffany is so busy on the right--she's got a lot of catching up to do. Could someone please make sure she knows how to count to fifty?

Happy Red Rose Day! Celebrate it by stopping to smell the above-mentioned roses, giving one to that special someone, or throwing an entire bouquet of them in the trash after being stood up by your girlfriend. Or you can ignore red roses entirely and check out today's fanfic update!

Today is Kamehameha Day, a Hawaiian holiday that celebrates Kamehameha I, the first King of Hawaii. Stacy seems to be having fun, but just wait until Sandi catches her wearing that outfit.

Amy also sends this postcard from her vacation in Hawaii: "Dear Sis, you'd love island life. Beautiful sun, wonderful people, umbrella drinks up the kahaualea. Only thing is, you'd have to take a vacation. Oh well, sorry I brought it up. My love to all, Amy."

Fourteen years ago today, the episode "Pinch Sitter" first aired. In it, we learn that Hitler ate sugar, that Skylar Feldman's family owns a boat, and that no one will ever ask to see your permanent record. Very educational, and I haven't even used the word "indemnification" yet!

It was on this day in 1949 that George Orwell's dystopian novel Nineteen Eighty-Four was published. In addition to the above quote from "Psycho Therapy," the book is also referenced in "Write Where It Hurts" as one of the reading choices in Mr. O'Neill's class.

In fan-fiction, Thomas Mikkelsen's A Stacy Orange, Brother Grimace's Victory Lane, and The Angst Guy's Daria 2007: The Girl from Hope all refer to the novel to varying degrees.

And now over to Big Brother with the latest fandom news!

Today is the 67th anniversary of D-Day, which was the day of the invasion of Normandy by Allied forces during World War II. Sandi looks ready to take on the opposition single-handed, possibly because she blames them for her new haircut.