Put That in Your Pipe and (Don't) Smoke It!

Today is World No Tobacco Day, the day when people are encouraged to give up all tobacco products for twenty-four hours. This would be an especially good idea for those of you planning to participate in any faculty-DJ roller hockey games.

Remembering Those Who Fell

Today is Memorial Day, and while many people consider it simply a day off from work or school, it's also the day many others in the United States take time to honor those soldiers who died in the service of their country. Several Daria fanfic authors have written stories to commemorate this day:

On a lighter note, Memorial Day appears as a student at Holiday High School in the episode "Death Takes a Holiday":

Memorial Day: You gotta help me. Lincoln's going to make me recite the Pledge of Allegiance. Call him off!

Thank you to all those who serve.

Happy birthday to the late Ian Fleming, born on this day in 1908 and creator of the character James Bond. Although Mack is pictured as the British spy, Upchuck is the character on Daria known to be a fan. Also, Daria's Melody Powers character was most likely influenced at least in part by Fleming's novels.

Today is also the anniversary of the birth of the Dionne quintuplets, born in 1934 and the first set of quintuplets to survive past infancy. The Angst Guy wrote about a much scarier set of quintuplets in Quinnts Episode #101: Extremesters--five different Quinns!

It was on this day in 1939 that Detective Comics #27 hit the stands, and with it the first appearance of Batman. A ton of comics, various TV/cartoon series, quite a few movies, and any number of offshoots have followed, including several crossovers and references in Daria fanfic. The Batmobile was featured prominently in The Angst Guy's A Knight to Remember and NightGoblyn (as well as a few guest writers) have created an entire series that includes a Batman crossover in Lawndale's Finest.

And speaking of fanfiction, here's the latest update!

Do You Know Where Your Towel Is?

Happy Towel Day, everybody! I know we have at least a few Hitchhiker's Guide to the Galaxy enthusiasts out there in fandom, so here are a few Daria/H2G2 crossovers for your enjoyment:

And now, the moment you've been waiting for: the fandom news update!

Gimme a Hand with this Caption Contest! 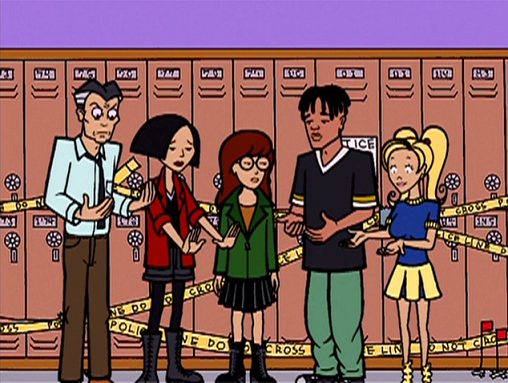 Happy birthday to Sir Arthur Conan Doyle, born on this day in 1859 and creator of the literary character Sherlock Holmes. There have been at least a couple of Daria/Sherlock Holmes crossover fics out there, including Ranger Thorne's A Study in Emerald and M Man's The Adventure of the Chinese Restaurant. There might be more, but my Google-Fu is weak today and I haven't been able to track them down. Post in the comments if you know of any others, and in the meantime I'll share the latest fanfic update:

Also, updates may be a bit sporadic over the next week or so as I will be out of town until Memorial Day. I'll still post when I can, though!

Well, the world is still here for now, at least until the next time it's supposed to end. Maybe someone miscalculated somewhere. Maybe we got a last-minute reprieve. Or maybe the world realized it couldn't possibly end on Mr. T's birthday!

No, it isn't really Christmas. On this day in 1908, actor Jimmy Stewart was born. At least two references were made in Daria episodes to one of Stewart's most well-known movies, It's a Wonderful Life. The first was in "Depth Takes a Holiday," when St. Patrick's Day tells Daria, "You see, Daria, you really had a wonderful life." Daria's response of "What the hell are you talking about?" wasn't in the original movie as far as I can remember, though.

The second reference was near the end of "Jake of Hearts," when Jake, excited by the revelation that his father was dead at his age, runs outside to celebrate in much the same way that Stewart's character did when he realized he was alive.

In addition to the above, Beavis and Butt-head also did a take on the movie in the episode "It's a Miserable Life." It turns out the world would actually be a much better place if Butt-head had never been born. Especially for Daria.

The Darkest Hour...Was Most of the Day, Actually

At around noon on May 19, 1780, the sky went dark over New England, causing many to believe that the end was nigh. Turns out they were two days and 231 years too early. Maybe. Or not.

Also, in one fanfic universe, Daria found herself with a new pet on this day in 1991. Read the story to find out more!

Meanwhile, I've got the latest fandom news ready to share:

The first Kentucky Derby was run on this day in 1875. The winner was a horse named Aristides, who I'm sure ran much faster than Helen ever could.

Also on this day, in 1954, Brown v. Board of Education was decided. This not only led to the desegregation of public schools, but also was a significant step forward for the civil rights movement. Hooray!

Labels: brown v. board of education, lots of new and continued fanfiction, the derby

He Looks...Happier Than He Did as a Teacher, Anyway!

Happy birthday to the late, flamboyant entertainer Liberace, who was born on this day in 1919. DeMartino's impersonation of him on the left is probably equal parts accurate and disturbing.

Also on this day in 1770, Marie Antoinette and (soon-to be) King Louis XVI were married. I think we all know how that story ended, but Quinn learned the important stuff in Is It Fall Yet?

At Least Keeping His Eyes Closed Won't be a Problem!

Happy 67th birthday to George Lucas, creator of the Star Wars and Indiana Jones movies. Interesting alter ego on the right, but somehow I doubt that Trent really has either the stamina or the motivation to hunt down priceless artifacts and fight off Nazis.

Have a Hair-Raising Day!

Look out, everyone, it's Friday the 13th! Don't let any black cats cross your path or walk under any ladders or try to dye your best friend's hair with tiger stripes. You know, the usual bad luck hijinks.

In an interesting Friday the 13th-style turn, a Blogger outage delayed me from posting this for hours. Yet another omen? Hmmm.

As for fanfic, Friday the 13th (the day) appeared as a character in The Angst Guy's A Hard Days' Night, and MFC wrote a fanfic crossover with the movie Friday the 13th, H13: Hell On The 13th.

Today is the first anniversary of the Official Daria DVD Release Date! Well, Region One release, anyway. Also, technically a lot of people got their DVDs before that day, but it's still an important date to recognize!

Even if some of us are still holding out for a DVD release with the original music.