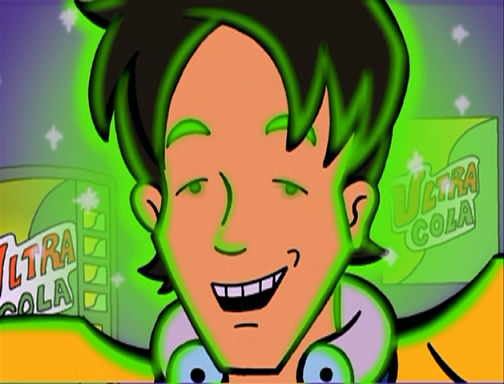 "My neck modeling career is over!" 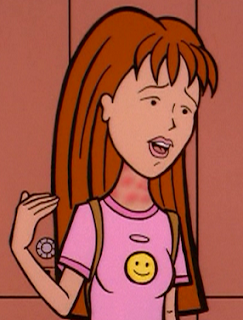 It's National Pistachio Day! Crunch some pistachio nuts with your lunch. Buy them by the bunch. Send them to friends far away to munch. Especially send some to Quinn, who is allergic to the dye and will most assuredly appreciate the gesture!

In the meantime, though, pull up a bowl of pistachios and enjoy this fanfic update! 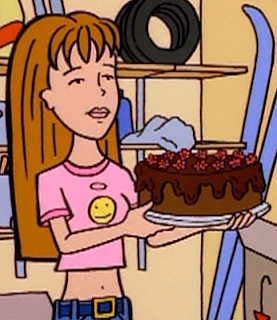 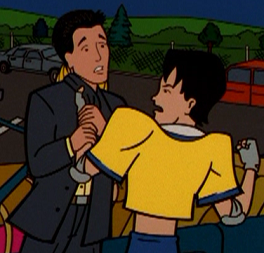 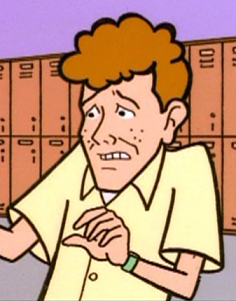 Labels: it happened one nut, lots of new and continued fanfiction

"Who's Eunice and why doesn't she get her own body?"

On this day in 1999, the episode "Through a Lens Darkly" aired for the first time. In it, we got to see Daria without her glasses, a freaky dream sequence, a rare appearance from Amy Barksdale, and an almost-but-not-quite vehicular dogslaughter. Oh, and a recurrence of the "talking toilet" joke first seen in "Pierce Me."

Richard Lobinske wrote "Lessons," one alternate universe version of the events in the episode. Ajar wrote another version in Regifted 2: I Put Away Joyless Things. I'm not sure if there have been any other retellings, though. If not, there should be. What if Daria had decided to keep the contacts? Would it have changed anything later in the show? For example, would Tom have approached Daria first instead of Jane? Interesting food for thought, anyway.

Hey, What About (insert name here)?

In my last post, I mentioned that there aren't very many fanfics about the two characters who represent Presidents' Day on Holiday Island. It was (mostly) a joke, but it got me thinking about other minor characters who haven't gotten much fanfic attention. Certain supporting characters, like Aunt Amy, Tommy Sherman, and Ted DeWitt-Clinton, have had major roles or even been the main characters in numerous fanfics even though they only appeared on the show two or three times.

Then there are the backgrounders, characters who appear in various episodes but generally don't have speaking roles or even names aside from the ones given to them in fanon. Recently, characters like Shaggy, Burnout Girl, Bob the punk, and many more have taken center stage in lots of fanfics, getting character development never dreamed of by the show's writers.

But what about the rest? The characters who were important enough to have names and occasional speaking roles, but not important enough to appear more than a handful of times each? I'm thinking about characters like David Sorenson, one of the rare smart people on the show and, as a tutor, probably witness to the inner workings of plenty of families in Lawndale. Or Axl, who must have a few interesting stories to tell about the alternative culture as he interacts with the patrons of Dega Street. Unlikable as the character is, I'd bet a writer could have lots of fun writing about a day in the life of Val (as in Val).

Who would you like to see more of in a fanfic? Wannabe Brooke? Retro Nathan? One of the Wandering Lanes? Post your thoughts in the comments!

"Of the people, by the people...for the presidents."

Happy Presidents' Day! I recommend that you celebrate by not wearing sandals. You can play the harpsichord if you want, though. Acoustic or electric; your choice.

I haven't been able to find any fanfics about Presidents' Day (either the holiday or the character), but Roentgen's Our Founding Father features George Washington and Smijey's The War on Christmas makes reference to the holiday. Perhaps the characters are due for some fanfic attention! Okay, maybe not.

On the other hand, we are due for a fanfic update!

"From outer space to in your face!"

On this day in 1962, the Friendship 7 was launched. The pilot, John Glenn, became the first American and third person to orbit the Earth. Astronaut Jodie salutes him, although you've got to wonder about that smirk on her face. Either she just spotted some hot alien beefcake or she's relieved to have finally found a way to get away from her many extracurricular activities. 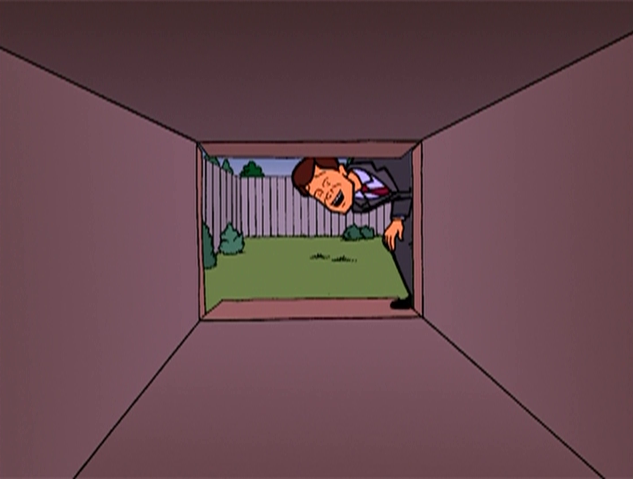 What does Jake see in the box?

Today is retired (multiple times) basketball player Michael Jordan's 48th birthday! He is not to be confused with Michael Jordan Mackenzie, who as far as I know has neither played basketball nor retired from anything. Also, I doubt anyone regularly refers to Michael Jordan as "Mack Daddy."

Today is also the day the musical episode "Daria!" aired in 1999, as well as the 10th anniversary of the airing of "Sarcastathon 3000." Both have provided fandom with a ton of hilarious images, many of which have appeared in this very blog.

Now, how about a fanfic update?

For Everyone Who Isn't in a Relationdateshipthing

I wonder what the Holiday Island version of Singles Awareness Day is like. A swinging bachelor(ette)? Someone who moans about how she or she will never find that special someone? Or maybe someone who just walks around pointing and saying, "Hey, look! A single person!"

Today is also Half-Priced Candy Day, one of several observances throughout the year. Go forth and celebrate by grabbing all of the clearance chocolate you can get your hands on! Or at least, whatever's left once I've gotten to it first.

Happy Valentine's Day! Nothing quite says "love" like a half-naked Upchuck, so consider this my holiday gift to you all. Try not to get hit by Cupid's love taser or get tricked into blurting out the name of that particular someone who makes you feel like Queen Cleopatra.

Especially if that particular someone happens to be a half-naked Upchuck.

While you all try desperately to erase that image from your minds, here are a few Valentine's Day-related fanfics for your enjoyment:

Today is a big day for historic birthdays! Charles Darwin and Abraham Lincoln were both born on February 12th in 1809--same day, same year.

Darwin is known for putting forth the theories of evolution and natural selection, as described in his most famous work, On the Origin of Species. He's also known from this exchange in the Daria episode "The Old and the Beautiful":

Mr. DeMartino: And so, the Democratic Party came to be associated with the "welfare state," and the Republican Party with a more Darwinian approach. Which do you favor? Kevin!

Kevin: Darwin's the monkey guy, right? I like monkeys.

Mr. DeMartino: A statement no doubt once also made by your mother!

Kevin really is a fan of Charles Darwin, though, because "when Curious George gets in trouble, he always lets him slide."

Lincoln, the 16th President of the United States, is one of the country's most famous and beloved leaders. His most famous act as President was the Emancipation Proclamation, but in "I Don't" the circumstances of his assassination takes center stage:

Brittany: You mean the bullet didn't kill him?

Anyone Need a Folding Coffee Cup?

Today is National Inventors' Day (United States)! You can celebrate with Mack and Quinn, but I wouldn't recommend drinking anything Mack offers you. Just in case. Fantasy Future Daria would join in, but she's working double shifts at the gene splicing lab again. Stupid Fantasy Future Trent.

Although they've long been a major part of Daria fanfic, alternate universe stories seem to be showing up more than ever recently. These range from gender benders where a canon character switches sexes (like HolyGrail2007's Finn Morgendorffer or InvisibleDan's James Lane) to "what ifs" with relatively small changes that lead to big ones (like Roentgen's Hallowed Halls of Fielding) to major shifts in the entire canon universe (like Charles RB's God Save the Esteem or LadieT's Jane Morgendorffer).

Part of the reason for the increase in AUs is that canon only provides so much material to work with. After a while, it seems like most of the ground has been covered and it becomes sensible to look for new spins on old situations. A small (or huge) change here or there, and suddenly you have a fresh foundation to work with!

Another reason is that it's just plain fun to explore "what might have been." Just about every event during the course of the show has the potential to branch off and become a new story--or even a new series. Why not explore the path not taken and see where it might end up? Especially if it's one that leads to personal and spiritual satisfaction. That's why they don't want you to take it.

One further reason, of course, is that it's a great opportunity to play God with the characters and utterly rearrange their lives. A few taps of the keyboard and suddenly the Morgendorffers have a third daughter or Trent is a middle schooler with a crush on high school Daria. That kind of power can be irresistible. I'd make them crawl, I tell you. Crawl!

Of course there are plenty more factors at work here than the few I've mentioned, but now I'd like to open it up for you to chime in. What appeals to you about reading or writing alternate universe stories? What AU hasn't been written yet that you'd like to see? Does this blog make me look fat?

Today is the 101st anniversary of the founding of the Boy Scouts of America. Aside from the appearance in "Legends of the Mall," shown on the right, the only real reference made to the Boy Scouts in Daria is that Jake and Rita's boyfriend Paul were in the Scouts together as boys. However, without the Boy Scouts we probably would not have had Girl Scouts, and Jane would never have had to endure hearing the song "John Jacob Jingleheimer Schmidt" while going on hikes. And who wants that?

By the way, has anyone ever written a story about Jake in Boy Scouts? If not, they should. Like, right now. I'll wait. (checks watch)

While we wait, here's the latest fanfic: