It's Helen's favorite holiday, Love Litigating Lawyers Day! I suppose Jake does, but I'm not sure about anyone else. I'm pretty certain no one loves Eric, though.

Fifteen years ago today, Jane and Daria made a cameo appearance in the online comic strip "The New Adventures of Bobbin." I'm a little surprised the girls were willing to own up to The Triangle, but maybe they've come to terms with the whole thing by now. 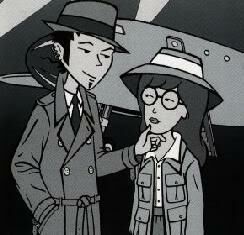 Is It Chat Yet? 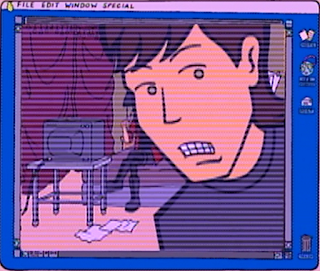 Don't mind Tom. He's just worried that there's going to be another live Daria-Jane chat on MTV like the one sixteen years ago today. The chat in 2000 was text only, but I can see where Tom might be nervous about the idea of webcams.

The movie Is It Fall Yet? aired on the same day, so don't expect Mr. DeMartino to be available for an online chat--he's going on a hike!

Labels: anniversary, fandom news, is it fall yet?, the infamous daria and jane chat of august 2000 on mtvdotcom

How's She Going to Hold Her Pom-Poms?

Brittany's sporting a new look for director Tim Burton's birthday. Burton, who directed Edward Scissorhands and many others, turns 58 today. Looking at those hands, I'd say that Kevin's going to be a little more careful about the things he says to Brittany for awhile. Or not.

"Gee, Quinn, if you're so smart maybe--AUGHHHHH!"

Sandi's celebrating Ride the Wind Day, but it doesn't look like it was by choice. I have a sneaking suspicion new Fashion Club President Quinn's feeling very smug right now. I wonder if Sandi's going to follow in Roger's footsteps and land on a cow.

It's a Good Day for Old People and Lawyers

Brittany's reading with seniors again for Senior Citizen's Day, and I bet she hasn't forgotten her own advice about wearing sunscreen. Daria may or may not be visiting Mrs. Blaine today, depending on whether or not she's written a new Melody Powers installment.

This also marks the anniversary of the founding of the American Bar Association in 1878, and I'm sure Helen would be observing this important day if she wasn't so busy at work. She'll probably have a few minutes free next week to celebrate, though! Maybe! 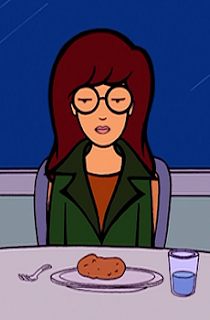 Today is also the anniversary of Gene Roddenberry's birth in 1921, and as there are quite a few Star Trek fans in Daria fandom I think it's worth mentioning. Aside from echopapa's Memory Lane, I can't think of any crossover fics off the top of my head. Can you? Bonus points if they feature potatoes!

Young Daria's all set to celebrate the anniversary of Animal Farm, which was first published on this day in 1945. That's assuming that Helen doesn't snatch it away, and Skip leaves her alone long enough to read it, and Amelia stops talking so she can focus on the book. I'm afraid it's not really looking too good, Daria.

Relaxing and Music Do Go Hand in Hand! 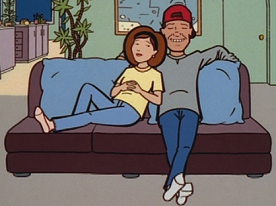 Helen and Jake are taking a rare opportunity to kick back for Relaxation Day, but I wouldn't count on it lasting more than a few minutes. If it's not Helen's phone ringing, it'll be Jake going into a Mad Dog-related rant.

Meanwhile, Daria and Jane might be on their way to Alternapalooza, which apparently began on this day in 1997. Portable toilets and sitting on the ground...it doesn't get any better than that! 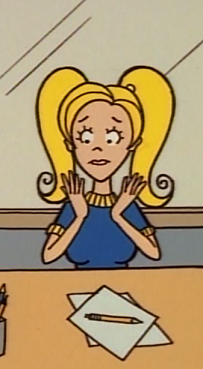 Why Did the President Cross the Road?

Kevin is amused by Presidential Joke Day, and I can't think of a bigger joke than Kevin as George Washington. Just like in Mrs. Stoller's story, though, he's not very focused.

Today is also the anniversary of the episode "Just Add Water," which first aired on this day in 1999. It may have been a so-so episode, but some of those Sick, Sad World bits during the marathon were pretty funny.

Did You Know He Was Jane Fonda's Father in Real Life, Too?

Daria would like a bit of peace and quiet so she can enjoy Book Lover's Day, but she isn't likely to get it. She might have better luck if she read Walden, which was published on this day in 1854. Or, rather, she might have better luck if she goes to Walden and enjoys the isolation. I'm sure something would end up ruining it for her, though. Either Quinn would find her or she'd find out no one will deliver pizza to the wilderness. It's always something, isn't it?

They Must Really Have Bonded Over "Gone With the Wind"! 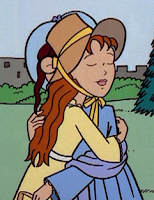 Daria and Quinn are sharing a tender moment on Sisters Day, and their relationship is so close and loving that the only image of them hugging comes from a fantasy sequence. I wonder if Quinn prefers to celebrate Cousins Day instead. 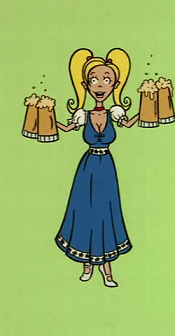 The Grease is Optional 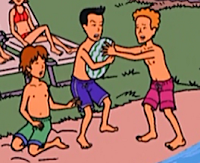 Billy, Bobby, and Benjy have the right idea for National Watermelon Day, although I'm not sure the vaseline is strictly necessary. To each his own, I guess. The rest of us can probably settle for eating ours, though.

Today is also the anniversary of the episode "Write Where It Hurts," which first aired on this day in 1998. You'd think watching a character struggle with writer's block would be boring, but all of the random fantasy sequences and funny references made that one a fan favorite. 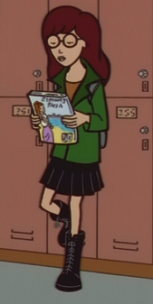