102nd!
anniversary of the Tunguska Event, a titanic explosion whose origin is fiercely debated and whose existence has become a geek touchstone. (It was mentioned without explanation in Ghostbusters, and everyone who was a geek got it.) Some fascinating websites covering the Tunguska event include this one, this one, and this one. (Click on "tunguska event" under Labels to read previous blog posts about this burning issue.)

It was a good thing the event didn't occur over a major city—or, as Daria would put it...

Do you realize that only one Daria fanfic even mentions the Tunguska Event? ONLY ONE??? The shame of it. Okay, I lied: two others (here and here) also mentioned it. BUT ONLY THREE?

No pin-headed historical person could ever make that much sense 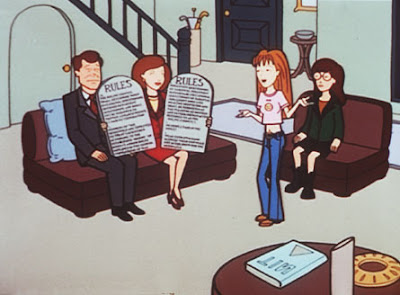 Thirteen years ago, it was time for "The Big House" to pop out of the TV tube. We got to see one of Andrea's big moments as she rooted for DeMartino's messy demise, and Helen's imitation of Moses, and the deliberate flouting of parental authority. And Daria sneaking home in some unknown person's car for reasons never explained. What was she doing out so late with no explanation? 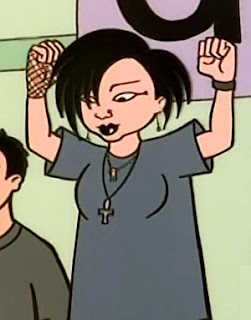 GNUZ!
FF.net
PPMB (working on the fanfics section now, sorry for the delay) (done, I think)

Really great school fanfics like "Regifted" and "The Hallowed Halls of Fielding" make you wonder if Daria and Jodie made the wrong decision. (True, "Grove Hell on Earth" makes you think maybe Daria did the right thing, but still...) I mean, so the two of them would have to be around idiots. They get such a rich exposure to knowledge, how could they think they were making a mistake? They gave up some pressure, but it could have made them shine. Instead, they chose to rust on the heap with the other idiots.

It's a hard call. If they were going to be miserable in school, at least they could have made it worth something. Daria would lose Jane, true, and Jodie would lose Mack. And the series wouldn't be the same. But still... 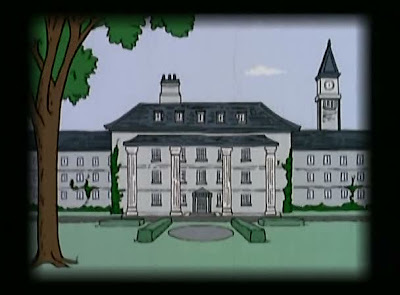 Enough of that. Back to reality. Happy 12th birthday to "Gifted," which did indeed make us think.

Oddly enough, this is also the 12th anniversary of the last time that one of the oldest Daria fan sites was updated. We pay our respects to alt.lawndale.com and wish it the best. 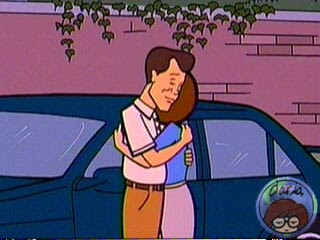 A decade ago today, we were treated to "Psycho Therapy," in which we learn a lot about Helen we already knew or suspected. We then learned Daria was okay with her mother and father exactly as they were. She knew she couldn't change them. Daria even saved the family from disintegration. Jake and Helen hugged and all was back to normal.

This was definitely not the season 1 & 2 Daria. All that talk about shooting her mother, then she does something noble and sweet. Wonder if Daria's kids will be as kind to her. Best line from Daria: "Gee, look at the time. 1984 all ready." Loved Quinn's Cleopatra moment, too.

Most interesting line was from Helen in the parking lot, to Daria: "Look what I've done to my family! Your father feels completely neglected and resentful. I've shut you out so many times, you don't even try to talk to me, and Quinn... well, I can't even think about what happened there, not right now. Oh my God, Daria! You didn't hear that!" Oooooh, boy.

A dozen years ago today, we were treated to Daria and Jane as our hosts in MTV's "Top 10 Animated Videos Countdown." ("My arms! I can't move my arms!") The winning video was Peter Gabriel's "Sledgehammer." Those were the days when Daria came on MTV on Monday nights at 10:30 p.m. EST. I missed it all, didn't have MTV at the time. Dang.

Which Holiday Shall I Celebrate First?

A scene from this Daria story took place 41 years ago today. Today is also a bunch of interesting holidays rolled into one. We have:
How you plan to celebrate all that is up to you. Good luck. Stay tooned.

NEWER! Charles RB has created a new Iron Chef: Tommy Sherman has risen from the grave! Go there and do your best!

And on to the fanfiction.

It's been thirty-five years to the day. How time flies. Congratulations, Helen and Jake, for making it this long without going completely insane. Or driving your children insane. Good show. Click on the image for the full-size thing.

We ought to make this a fandom holiday. I should check to see what fanfics have been done about Helen and Jake's wedding or whatever it was. BRB.

LATER: Back. Here are some fanfics that mention or describe the commitment ceremony, however briefly, in no particular order.
Some years ago I recall reading another by Mike Xeno, but it seems to have vanished. Rats. Moar soon.

ANOTHER LATE NOTE: Found it!
Hooray!

YET ANOTHER LATE NOTE: Almost OVER 175,000 HITS on this blog! Thank you, everyone!

Labels: helen and jake's wedding or whatever it was, the daria diaries

Out of the Box 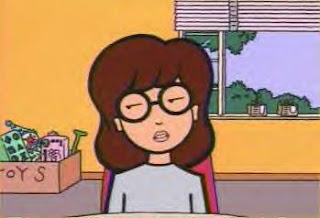 Lots of stuff going on today in Daria history. Nine years ago today, the last Daria episode aired on MTV: "Boxing Daria." We got to look at her early life in Highland when she didn't get along with others, and ended with her a senior in high school, only marginally getting along with others.

Seven years from this day, one of Daria's daughters gives birth. In which fanfic does this occur?

Eleven years ago today, the last names of Stacy Rowe and Tiffany Blum-Deckler were revealed on the MTV website. A banner day indeed.

Fandum N0OoZ!
More to come, for sure. And here it is. 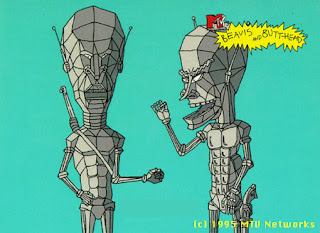 Hard to believe that only 63 years ago, the modern age of the UFO began with the sighting of nine flying objects near Mt. Rainier by pilot Kenneth Arnold. This curious moment in history is sometimes now called UFO Day, and we celebrate it as such here. Are UFOs from alien worlds? Is there a conspiracy keeping the truth from us? Could Beavis and Butt-head have anything to do with it? Keep watching the skies!

In other historical news, it was only 636 years ago today that one of the first known cases of dancing mania broke out. It appeared in Aachen, Germany, then spread across Europe and affected thousands of people who danced uncontrollably until they collapsed. Despite all rumors, the outbreak had nothing to do with disco, which was a much later disaster.

My 'pooter lost its Internet connection yesterday, back again, sorry about the delay. This blog has previously noted that today is an important day in the Computer Age, but computers still suck when they won't work properly.

Anyway, Happy Midsummer to one and all, hope yours is a good one.

The Beavis and Butt-head episode "Babes 'R' Us" first aired on MTV 17 years ago today. It briefly featured Daria Morgendorffer snarking at B&B for being stupid, which was the case in 95% of all of Daria's appearances in that series. The scene in question later appeared as an "Easter egg" on the Is It Fall Yet? DVD.

A United Nations holiday occurs today that was probably established just for Jodie Landon. Click the link and see if you agree.

Which fanfic was conceived of ten years ago today? The answer is a tricky one.

Updates to the Midwest Dariacon 2010 thread have been posted. Please read if you plan to attend.

NEW! Erin M. discovered an avatar-maker at the website for the upcoming movie Scott Pilgrim vs. the World, so here are Daria and Jane—Pilgrimfied!

NEW! Thanks to Pittsburghmuggle, we have a DariaWiki page with all the lyrics to the songs in the third-season episode, Daria! Thank you!

EVEN NEWER! Anyone out there collect Daria memorabilia from years gone by? If so, get in touch with other collectors in this PPMB thread (and meet a Great Name of Old, too)!

Some People Cannot Be Taught Labels: carson daly, is it fall yet?, mtv

The Heat Is On!

It's International Surfing Day today, which means it's also the Summer Solstice! PAR-TAYYY!!! The summer solstice (give or take a day) is the time for many holidays around the world, such as Go Skateboarding Day, Fête de la Musique (a.k.a. World Music Day), World Humanist Day, National Aboriginal Day, and Inti Raymi. Enjoy!

Dulcinea has a question on PPMB: will Daria miss the people she knew in high school? Lots of answers given already.

Do It for the Old Man

Happy Father's Day to you dads out there, and to those celebrating the occasion. And here's to you, too, Jake.

Interesting historical note for today. On this day 118 years ago, Lizzie Borden was acquitted of the axe murders of her father and stepmother. Jake Morgendorffer had this reaction to Lizzie Borden's story.