Daria's enjoying what might or might not be coffee on National Coffee Day, but she'd better not overdo it. Today is also World Heart Day, and too much caffeine wouldn't be healthy. Jake should take note, too, although I think caffeine for someone as high-strung as Jake is a bad idea even without his heart condition.

Hitting All the Right Notes

Quinn's certainly enjoying Love Note Day, although I'm sure no one could love Quinn nearly as much as she loves herself. In fact, it wouldn't surprise me to learn that she sent more than a few of those notes to herself.

Today is also Crush a Can Day, so Kevin will probably spend this super-romantic day smashing beer cans against his head. Same as any other day, come to think of it.

Mr. O'Neill's getting into the spirit of National Comic Book Day, but I think he's off the mark for this one. The wimpiest Daria character as one of the all-time strongest comic characters? I don't think so. Is there a comic book character out there called Spineless Man? Because he could totally nail that one.

But Let's Not Celebrate This PARTICULAR Bisexual, Okay?

Alison is pleased to inform everyone that today is Celebrate Bisexuality Day, which would be great if Daria hadn't taken the only LGBT character and turned her into a predator. Oh, well.

This is also Banned Books Week, so please follow Daria's example and yell at the television! Or, better yet, read a banned book or two yourself.

Daria's going to have to do better than flash a peace sign if she wants to celebrate International Day of Peace. In fact, she'll probably opt to spend the whole day observing the quest for peace...and quiet while she reads a book.

Today is also the anniversary of the publication of The Hobbit on this day in 1937. If Jake didn't take this opportunity to make Helen another Hobbit-shaped candle, I'll be very disappointed. 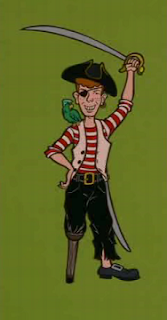 Upchuck's on the lookout for booty (which will probably get him slapped) because today is International Talk Like A Pirate Day. Be sure to throw in plenty of "avast" and "yo ho ho" to your conversations so all your friends will think you're cool. Enjoy your grog and plunder!

Quinn Would Rather Occupy Fifth Avenue

Corporate Quinn thinks she's having a bad day now, but just wait until she finds out that Occupy Wall Street has returned to celebrate its eighth anniversary with a massive demonstration right outside her office. Not that she has a problem with protests, but all that talk about 1% and 99%? Ewwww. Way too much math.

That's Not How Old Money Gets Old

Tom is feeling generous for Free Money Day, and I'll take him up on it even if you won't. It's not like he's going to run out anytime soon, after all.

Ms. Li is horrified to find that today is Friday the 13th, or maybe she just realized that she forgot to feed the bomb-sniffing dogs. Either way, keep in mind that today is also Defy Superstition Day, so go ahead and cross a black cat's path and walk under a ladder if you feel like it. 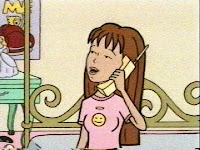 Quinn is calling 911 to report a major fashion emergency because today is Emergency Number Day. If you think that's a poor use of emergency services, then you haven't seen Brooke wearing stripes and spots together. Ewwwww.

Does It Still Count as "Guest" Blogging?

Hey, remember that time I took over the Daria Fandom Blog II temporarily as guest blogger while The Angst Guy took some time off? Because it was exactly nine years ago today. I'm sure TAG will be back any day now. Any day.

Today is also Teddy Bear Day, so if you've been meaning to trade a bear for a mouse in order to steal your boyfriend back from a couple of scheming sisters, then...I think you should seek professional help. Just my opinion.

Beer and Football! A Winning Combination! 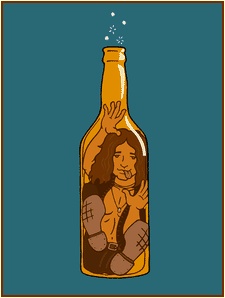 I think Jesse's loving beer just a little too much for National Beer Lover's Day, but perhaps he's just trying to hide from the sound of Kevin singing that stupid 99 Bottles of Beer song yet again.

Speaking of Kevin's favorite things, today is also the fortieth anniversary of ESPN. Then again, Kevin might prefer the Pigskin Channel, since ESPN has a bad habit of broadcasting non-football sports on occasion.

You Had ONE JOB!

Daria and Tom are very disappointed that they ordered what appears to be cheeseless pizza on Cheese Pizza Day. For shame, you two. For shame.

Today is also Be Late for Something Day, so maybe the cheese just hasn't arrived yet. I would say that this is Trent's kind of holiday, except that Trent is generally late for everything. 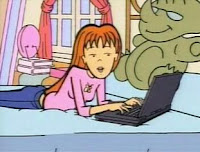 Quinn's just about to buy the cuuuuutest accessories on eBay, which is celebrating its twenty-fourth anniversary today! I'm sure Helen and Jake won't mind the higher-than-usual credit card bill, right? 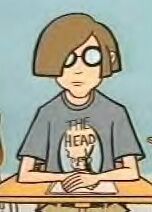 The Backgrounder known as "The Head" is finally getting his turn in the spotlight, because today is the twenty-fifth anniversary of the TV show The Head. All we know about this character is that he's a fan of the show and he (allegedly) has low self-esteem. He actually seemed pretty enthusiastic in class, which is surprising given that his teacher was Mr. O'Neill. Weird.