On the Bright Side, Mr. D is About to Get Some Serious Cash Under His Pillow

Mr. DeMartino has clearly had better National Tooth Fairy Days, and I don't think Mr. O'Neill is really dressed for the part, anyway. Still, I'd rather deal with him than the other candidate for the job, Metalmouth.

Today is also Public Sleeping Day, which is every day for Trent if he happens to leave the house. Has anyone ever checked that guy out for narcolepsy?

"My career as a neck model is OVER!" 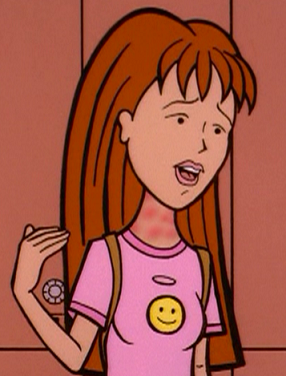 It's one of Quinn's least favorite holidays, World Pistachio Day! Although since technically it's the dye she's allergic to, she shouldn't blame the entire nut for her distress. The rest of you can munch the nutty nutty all day long if you want!

Today is also Tell a Fairy Tale Day, and the Gupty kids are waiting eagerly for a fresh tale of gore from Daria and Jane. Perhaps Quinn will gather them around a fire to tell them about Cinderella's clunky silver and gold sequins.

Finally, today is the anniversary of the episode "Sappy Anniversary," which aired on this day in 2001. Daria and Tom eating Quinn's chocolates might not count as a fairy tale, but they did live happily ever after. Oh, wait. They didn't.

The DFA winners are in! See the results linked here.

But Where's the Salsa? 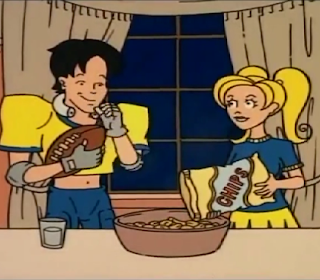 Brittany and Kevin are all set for National Tortilla Chip Day, and you have your choice between flat or ridgy ones! Just don't get them all mixed up, okay?

Today is also the anniversary of the episode "Through a Lens Darkly," which aired on this day in 1999. There weren't any tortilla chips in that one, but judging from her reaction Daria's contact lenses probably felt more ridgy than flat when she first tried putting them in.

Kevin is pleased to portray America's first QB--I mean, president--on George Washington's birthday. Brittany may not approve, because all she knows about the man is that he wasn't very focused. Then again, neither is Kevin, so I suppose it's a perfect match! Unfortunately for both Brittany and Kevin, today is also World Thinking Day, and I don't think they could come up with a single thought between the two of them.

Last chance to vote in the Daria Fanworks Awards! The deadline is almost upon us, so vote if you haven't already.

Helen isn't quite feeling Love Your Pet Day, but since Leary isn't her pet I suppose she gets a pass. It makes you wonder--if Helen were to get a pet, which kind would she want? I would bet something really low maintenance like a goldfish. Or maybe a pet rock.

Happy birthday to Daria voice actor Amy Bennett, who was born on this day in 1975! In addition to sharing a first name with one of the coolest characters on the show, she voiced Mrs. Johansen and Mrs. Bennett.

Time is running out to vote in the Daria Fanworks Awards! Please use the ballots in the linked post to send your votes in soon.

If I hadn't messed up and forgotten to post this yesterday, I would have been on time to join Jane and Alison for National Drink Wine Day. Still, I hope Jane remembered to turn Alison down when she offered to show her some pastels.

There's still plenty of time to vote in the Daria Fanworks Awards if you haven't done so yet!

Jake's doing some amateur archaeology as he tries to emulate Howard Carter, who entered King Tutankhamun's tomb on this day in 1923. I think he's finding less treasure and more sugar, but for Jake I suppose it's still a good deal.

Also on this day in 1998, the episode "Arts 'N Crass" first aired. I think my favorite moment is Helen's rare moment of awesomeness at the end. What's yours?

We're still waiting for more votes for for the Daria Fanworks Awards. Please vote if you haven't already!

"Everything is love, baby." 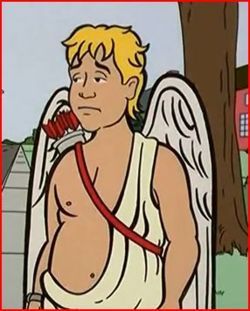 Cupid is here to remind everyone that today is Valentine's Day! If you don't have a special someone, then I'm sure Cupid will let you borrow his love taser...on second thought, better not bother. Besides, just wait until tomorrow: Half-Price Candy Day is a way more fun holiday.

If you do have a special someone, then why not take them on a romantic Ferris Wheel ride for National Ferris Wheel Day? Okay, so you might end up trapped with a sobbing Stacy for the duration of the ride, but at least you'll have the satisfaction of seeing her eyes turn that really weird shade of red, because red is a Valentine's Day color! See, it all works out!

Finally, don't forget to vote for your favorites in the Daria Fanworks Awards!

Are Bubbles Supposed to Come Out of the USB Port? 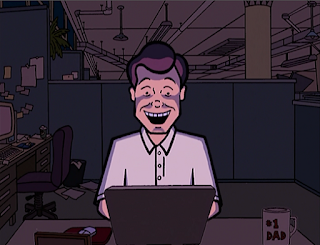 Jake is thrilled to report that he's all done sprucing up his laptop for Clean Out Your Computer Day, and I really hope that soap was not involved. If it was, I predict a meltdown--both technological and emotional--in the near future.

Today is also Abraham Lincoln's Birthday, so I suppose the Holiday Island President's Day will be exchanging high fives again. Any excuse to not have to share a holiday anymore, right?

If you haven't already, please cast your votes in the Daria Fanworks Awards!

Andrea's ready for National Umbrella Day, although I don't see any rain. Perhaps that's just how goths maintain their pallid complexion? Or she's making use of any weapon available to keep Upchuck at bay.

Voting is open for the 2017 Daria Fanworks Awards! Find the lists of nominations and links to ballots in the thread!

Ex-Girl Scout Jane probably already knows this, but today is National Girl Scout Cookie Day. You'd better pay up unless you want those adorable little thugs beating down your door!

In an interesting pint-sized battle of the sexes, today is also Boy Scout Day. Jamie, Jeffy, and Joey (or at least the 1950's fantasy versions of them) will celebrate by singing "America the Beautiful" and driving a young girl to accidentally entomb herself in a bomb shelter.

Jesse at the Bat

Jesse's a little more energetic than usual for the anniversary of Babe Ruth's birth on this day in 1895. Baseball doesn't really get a lot of attention on Daria; football takes center stage, Jake's a fan of both golf and basketball, but I can't think of a single baseball reference at any point on the show. Can anyone think of one? If so, share in the comments!

Just When You Thought He Couldn't Get Any Creepier 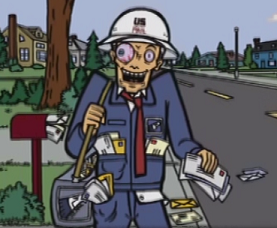 Although it is Thank a Mailman Day, I'm not sure if you want to get too close to Mr. DeMartino right now. Maybe once the medication kicks in. I'm not sure today's the best day to thank a mailman anyway, considering it's Sunday.

It's not just any Sunday, though! As Kevin will condescendingly tell you, it's Super Bowl Sunday! Of course, if football isn't your thing then I'm sure Ms. Li is holding a super-secret school review meeting you could attend instead. 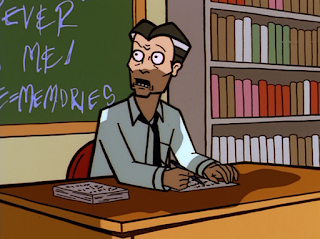 I don't know if the groundhog saw a shadow on Groundhog Day, but it appears that Mr. DeMartino did. I guess that means six more weeks of a Barch ass-kicking. The rest of us can turn to the forecast, rather than rodents, to check the weather.

Ted will be pleased to know that today is also Bubble Gum Day. If regular chewing gum blew his mind, just wait until he gets to try the bubble variety!