Daria's enjoying a rare peaceful moment on International Coffee Day, and I'm sure Jake's going to join her soon. Let's just hope he's got decaf, though. Also, Quinn wants to remind everyone that coffee = caffeine = dark circles. That was today's public service announcement.

Speaking of Jake, today is also World Heart Day, so whatever you do, don't mention what the doctor told him about cheese.

At Least She'll Be Safe from the Reds! 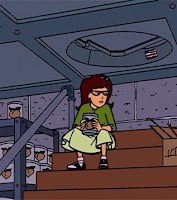 It's Crush a Can Day, and I'm sure Daria would love to try, given the lack of can openers available. If only Kevin and his can-crushing head were there--I'm sure he'd actually be useful for once!

This is also World Tourism Day, when everyone should leave their comfort zone, get out into the world, and meet new people! I think I just figured out what Daria's doing in the bomb shelter. 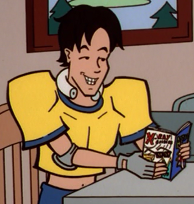 Kevin's definitely enjoying National Comic Book Day, with a little help from Ratboy. Why not grab a comic of your own and kick back for awhile? Hopefully yours contains less tooth swallowing than Kevin's does. Unless you're into that, in which case go nuts. 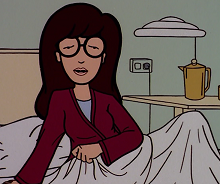 Summer Walked Out On Us! Just...Like...That!

Ms. Barch is representing Mother Nature in honor of the September Equinox, and I can't think of a more nurturing person to give the job to. Except maybe Genghis Khan. Still, we can finally answer one of the Daria movie questions: yes, it is fall yet.

Jesse is playing a few rounds in honor of Miniature Golf Day. When he was told that the holiday was for miniature golf, not regular golf, he sagely replied, "Cool."

J. R. R. Tolkien's The Hobbit was published on this day in 1937, so now's the time to make a lumpy candle for your significant other. Or was it a wizard?

Finally, this is Banned Books Week, so Daria's sure to be yelling at her television in her fight against censorship.

Shane Greentree/Gregor Samsa wrote a few Daria fanfics that fit in nicely with this holiday: Esteemarrs!, I Don't (Like Landlubbers), and The Plunderin' Of Don Jake. Enjoy, me hearties!

Tom's Too Occupied by Cash to Notice 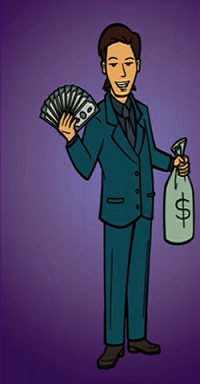 Three years ago today, the Occupy Wall Street movement began. Tom, as a member of the one percent, isn't terribly interested, but Charles RB tried a Daria twist on the protest in his God Save the Esteem story "Occupational Hazard" in which the Landons occupy Dega Street. It's exactly as crazy as it sounds.

It was Beauty that Beat the Crap Out of the QB 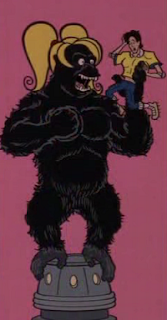 Brittany and Kevin are too busy to wish Fay Wray a happy birthday, but the late actress was born on this day in 1907. She was best known for her role in the classic film King Kong, which is being reenacted on the left.

Kevin is definitely not forgetting their anniversary again for a very long time.

Tom and Daria are enjoying some of Quinn's candy in honor of not only National Peanut Day, but also International Chocolate Day. If Quinn complains, they can explain that they're doing her a favor--some of that candy might have contained pistachios, and they know Quinn's allergic to the dye!

Today we observe Patriot Day, which commemorates the September 11, 2001 terrorist attacks. Several Daria fanfic writers have included the tragedy in their stories, and among them are:

It's Teddy Bear Day, and Daria is super excited about it, as you can see. You can almost read her mind here: "Let me guess. It squeaks."

Ruth Morgendorffer is here to remind us that today is National Grandparent's Day, and also to suggest that you hire a decorator. Jane's grandmother couldn't make it, but she asked that I pass along a message from her: "What the hell is wrong with you?!"

Aw. Grandmas are so sweet, aren't they?

Watch Out for that Cheese Burn

Daria and Tom look miserable because they forgot today was National Cheese Pizza Day and seem to have accidentally ordered pizza with toppings but no cheese. Must be the Fashion Club special.

Today is also Be Late for Something Day, and Trent will get right on that just as soon as he remembers what it was he was supposed to be late for.

Just Don't Ask Jake to Set Up Your Auction 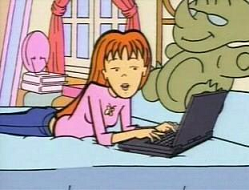 Quinn is just doing a little online shopping in honor of eBay's birthday. The shopping website opened on this day in 1995, and I'm sure Quinn was one of the first people to max out her parents' credit cards there. Unless she considered online shopping too "computer geek" for her tastes.

Happy Labor Day to those who actually get the day off! Helen is probably not among them, but I suppose that's fitting--it's a holiday that celebrates working, so somebody ought to be doing something productive. Not me, though. 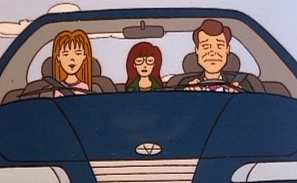