I'm Sure Quinn Didn't Enjoy Her Role At All 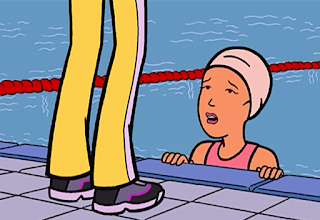 Sandi doesn't seem to be enjoying Swim a Lap Day, but that may be because she's been swimming laps for hours now. It takes a lot of hard work to maintain a size negative four, you know! Fortunately, she's got Coach Quinn at her side to torture motivate her. Swim, you cow, swim!