"Television counts as a place." 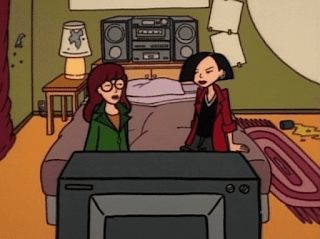 Daria and Jane are observing World Television Day, although I'm not sure this is any different from any other day for them. I should point out that the holiday is actually about the role television plays in shaping and helping society, so Daria should also be sure to yell at the TV if there are any book burnings going on.

Today is also False Confession Day, so if you want to own up to murdering Kevin, go for it. Just be aware that half of Lawndale High has already beaten you to it.