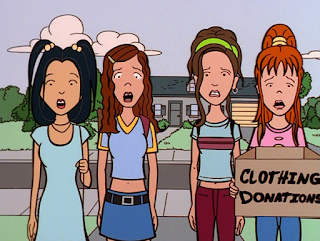 The Fashion Club is collecting donations for National Secondhand Wardrobe Day, but I think they might be rethinking their decision. And all of their life choices leading them up to this moment, honestly.

Today is also Kiss and Make Up Day, which one could argue was the end result of Daria and Tom's growing animosity toward each other over Jane. And then Daria had to make up with Jane, which did not involve kissing unless you've read a specific genre of fanfic.

Labels: holiday, lots of new and continued fanfiction, the kiss