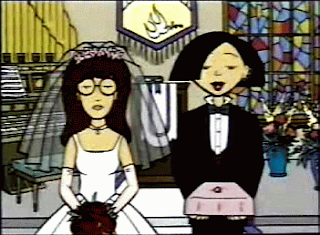 Eight years ago today, Vermont Governor Howard Dean signed into law the first bill in the U.S. that allowed civil unions for same-sex couples. This eventually led to the wedding of Daria and Jane Morgendorffer-Lane in the story, "Pause in the Air," and the Pause in the Air (PitA) series that followed.

Looking back, it becomes apparent that there were two great influences on my writing PitA. I mentioned one of them in one of the PitA stories: Armistead Maupin's marvelous Tales of the City novels. I read in the 1980s on the advice of a friend, and great advice that was. I consumed the novels more than read them. These lively, flawed, lovable people and their adventures gave me many pleasant hours of page-turning.

The more powerful influence, however, is one I haven't mentioned before. I confess I am at a loss to say why, as it undoubtedly provided the groundwork for the whole PitA thing. Maybe it was embarrassment. Anyway, I used to subscribe to a comics newspaper, and one of the series it carried was Alison Bechdel's Dykes to Watch Out For. I was not so much addicted to that comic as enslaved to it. It was sheer torture to wait an entire month for the next installment to come out. Those readers who are familiar with the series (still running!) will not be surprised to know that it was the civil union of Clarice Clifford and Toni Ortiz in Vermont upon which the union of Jane and Daria was founded, and Toni and Clarice's rambunctious son Raffi has been reborn as Quinton Trent Erin Morgendorffer-Lane.

The strangest thing to me is that I was not consciously thinking about Clarice, Toni, and Raffi as I was creating the series. What I was thinking most about was the dreadful quality of so much of lesbian-teen Dariarotica, and how funny it would be to write something about Daria and Jane as lesbians, but without the sex. I wondered if anyone would get the joke. "Pause in the Air" was written in January 2003, one of my entries to an Iron Chef I had started asking for stories about an unexpected guest who drops in for dinner with the Morgendorffers. (The baby was the "guest.") This was the same Iron Chef that also inspired "Nuthouse," "Thanks Giving," "Highland Fling," and Deref's classic Oz tale, "Antipodean Daria," so I guess those stories and "Pause in the Air" are siblings. Sort of.

Labels: alison bechdel, armistead maupin, civil unions, dykes to watch out for, pause in the air, tales of the city, vermont

I'd like to see more PitA at some point. That series was what gave me the inspiration that Daria/Jane could be done without it being tawdry fanservice, which directly led to them being a couple in my Heather & Damsel series.


I should probably do more of those.

I was thinking of moving the next group of stories forward in time by a few years. Won't say more, haven't thought it through yet.

Dude! Dyke To Watch Out For was my first ever exposure to gay lit.
Have you also read FunHome by the same creator?

I bought Fun House the second it appeared, and I had never even heard of it before. It is on the bookshelf behind me as I write this. I made myself read only one section a day because if I read more, the book would be over too quickly. It was magnificent. I go back and pick it up and reread sections all the time. It is amazing how she can look at her life in such literary ways, like the Odyssey and so forth. She seems much better read than I am, much better at expressing what she feels and thinks. That is an astounding book. Hooray, another DTWOF fan!

I meant Fun Home! That's funny, I wrote "Fun House" instead of the real title. I keep calling it the wrong name.

In the '80s-'90s, DTWOF appeared each week in Chicago's Windy City Times, which LGBT freebie paper I picked up regularly for a decade, mostly to get Bechdel's strip. (And for Rex Wockner's columns, whom I knew.) Larger cities have advantages!

When you stop to think of what they are holding in the picture, it looks more like Daria is dressed a flower girl and Jane is as a ringbearer, not bride and groom. Hmmm, that could make an intersting story right there.

Do plan to do a follow-up/ sequel to PITA? I would love to see what happens next.