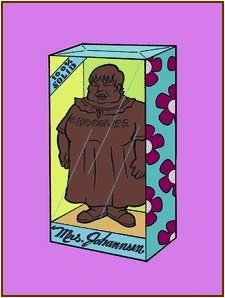 Looks like Mrs. Johanssen's wildest dream has come true in what can only be described as a National Milk Chocolate Day miracle. The downside is that eating her favorite food now qualifies as cannibalism.

Today is also the anniversary of the episode "Speedtrapped" in 1999. Never mind the fun of seeing Daria and Quinn work together or Mystik Spiral's take on children's songs--the real takeaway is the PSA about never picking up hitchhikers. They might be axe murderers or, worse, country music singers!