And Don't Get Me Started on the Pants 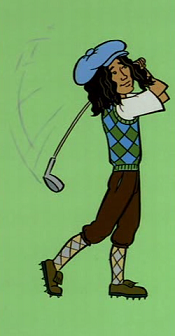 I just can't believe Jesse's outfit for National Golf Day. I mean, the guy who hates shirts is wearing not only a shirt, but a sweater vest. Even Max is starting to look cool by comparison.

Speaking of awful things, it was on this day in 2007 that Daria put in an appearance on Drawn Together...but we don't talk about that.