See You in the Funny Papers! 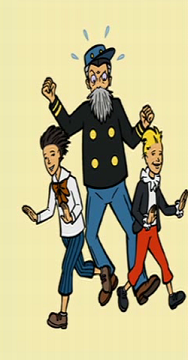 Looks like Mr. DeMartino is having as hard a time with the Katzenjammer Kids, from a comic that debuted on this day in 1897, as he does with the students at Lawndale High. I'm just trying to figure out if the two children are alter egos of any Daria characters. Joey and Jamie, maybe?

Today is also National Ding-a-Ling Day, so this would be a good day for Mack to wear his little hat and ring that bell that goes ding-a-ling-a-ling-a-ling. A-ling. Or maybe the holiday is just an overall description of Kevin. You decide!