It's Not Over Until the Fashionista Sings 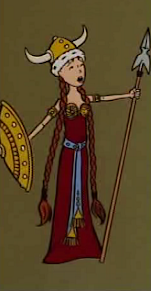 Quinn's making a dainty garland for her head so she can sing the lead role in "Madama Butterfly," which premiered on this day in 1904. Mr. DeMartino will be happy to know that the performance is not taking place in the automotive department.

If opera isn't your thing, you could instead enjoy the musical episode "Daria!," which aired on this day in 1999. There aren't any butterflies, but there is a hurricane...kind of.