All Hail The Ruttheimer Group!

Happy National Inane Answering Message Day! Upchuck has taken the opportunity to use the following (as quoted from The Daria Diaries):

Hey, I think there's fanfic potential in that last one. What kept Upchuck from achieving world domination three years ago? Was his plan foiled, or only delayed? Fandom must know. 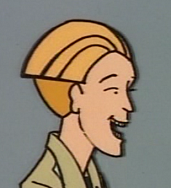